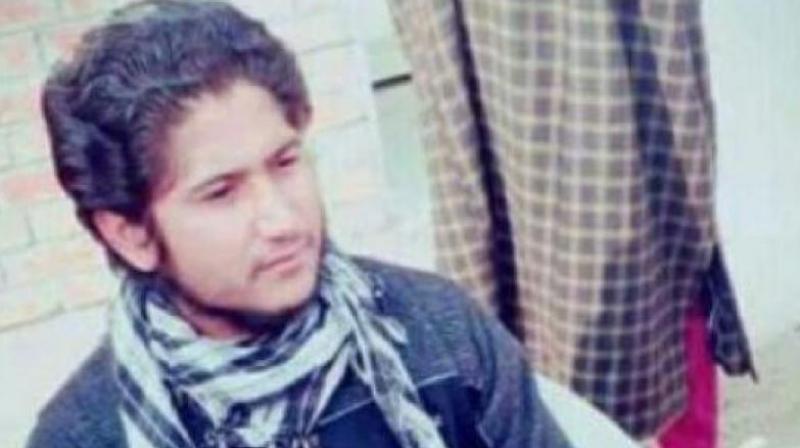 During investigation, it surfaced that the conspiracy was hatched few months back in Srinagar Central Jail by militants of Lashkar-e-Taiba and Hizb-ul-Mujahedin active in Kashmir valley. (Photo: ANI/Twitter)

Srinagar: The ‘conspiracy’ to ‘free’ Muhammad Naveed Jutt alias Abu Hanzala was hatched inside Srinagar Central Jail about four months before it was executed outside the OPD of a Srinagar hospital on February 6.

“During investigation, it has surfaced that the conspiracy was hatched few months back in Srinagar Central Jail by militants of Lashkar-e-Taiba and Hizb-ul-Mujahedin active in Kashmir valley”, he said at a news conference in Srinagar on Thursday.

However, the final planning to execute the same was made a few weeks back at the residence of Tika Khan in Singu Narbal village of Pulwama,” the police officer said.

According to him, the other conspirators were Hilal Ahmed Rather, Syed Tajamul, Shakil Ahmad Butt and Muhammad Shafi Wani -- all residents of Pulwama district.

The ADGP said,  “It has been established that Hilal, Shakil and Khan were masterminds in the whole conspiracy. Khan has also been a frequent visitor to Central Jail Srinagar and was in contact with Naveed. He visited Central Jail on different pretexts. Moreover, Naveed and rest of the gang were in communication using mobile devices during the conspiring stage.”

Khan who is officiating also as Inspector General of Police (Kashmir range) confirmed that Naveed opened fire at the policemen who were escorting him and five other prisoners to Srinagar’s government-run Sri Maharaja Hari Singh Hospital (SMHS) for routine check-up.

“Hilal Ahmed Rather (a Hizb-ul-Mujahedin militant who along with Naveed is at large) gave Naveed a pistol inside the casualty ward of the SMHS,” he said.

The police officer also said that during investigations it has come to the fore that Naveed spent the rest of the day in Srinagar itself and travelled to southern Pulwama district late Tuesday evening.

“After shooting two policemen, he travelled via Abdullah Bridge (which spans Jhelum River near Doordarshan Kendra Srinagar) to reach a safe place. He was in the city and it was only in the evening that another OGW (over-ground worker) picked him up and took him to south Kashmir,” he said.

A motorcycle was used to take Naveed from the hospital in Srinagar’s Kaka Sarai area to the northern part of the city across Jhelum. In the evening, he travelled in a vehicle to relocate to Pulwama.

The police officer disclosed that Rather and another militant Tika Khan had met Naveed twice in Srinagar Central Jail. He added that they had tried to ‘free’ him also from a court in Pulwama some time ago.

He said two pistols each have been recovered along with ammunition from two militants Shakil Ahmed Butt and Tika Khan. He said that on February 6 the accused went to the SMHS hospital in Maruti Car bearing Registration No. JK01J-9611 owned by Wani and a Pulsar bike belonging to Shakil Butt.

“On the day of incident, all the accused, as per the plan, moved towards the SMHS Hospital Srinagar where Naveed was being taken for medical check-up. The gang members took their respective positions in and around the hospital premises and waited for the arrival of Naveed. At around 11.30 am, the police team escorting the prisoner arrived in the hospital which was closely being monitored by the accused persons, who had mixed themselves with the attendants and patients,” Khan said.

He added that Naveed was taken inside the hospital for the check-up and the gang members rushed inside the hospital and fired on the cops from very close range and taking advantage of the huge rush of public, patients and attendants managed to escape, along with him.

“Other dimensions of conspiracy including the leakage of information about the movement of militant Naveed to the hospital is being thoroughly looked into,” he said.

Asked as to why the police didn’t open fire to foil the escape at the Srinagar hospital, Khan said, “We don’t believe in killings”.

He said that the police exercised restraint as opening fire at a place crowed with patients, attendants and hospital staff could have caused wanton casualties.