Kumaraswamy is set to present the state budget on Friday at 12:32 pm, which is considered an auspicious time. 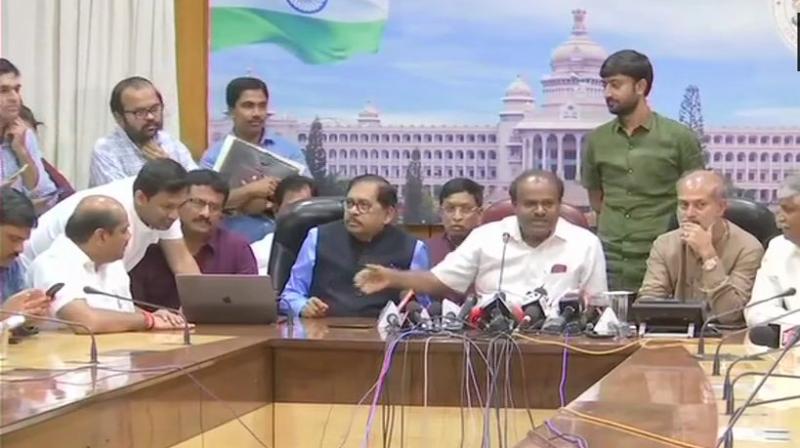 Bengaluru: Ahead of presenting the Karnataka budget for 2019-20, chief minister HD Kumaraswamy has released an audio clip allegedly of BJP leader BS Yeddyurappa trying to poach his MLAs.

Kumaraswamy is set to present the state budget on Friday at 12:32 pm, which is considered an auspicious time.

It will be the second budget of the Congress-JD(S) coalition government and is set to be along the lines of the one presented in July, in which the CM announced the farmer loan waiver scheme.

However, the budget is set to be read out amid protest by the BJP, having ensured on Wednesday that Governor Vajubhai Vala cut short his address to the joint sitting of both Houses.

BJP leader R Ashok said, “They have chosen to present the budget at 12.32 pm because they are afraid this government is set to collapse. That is why they have reposed faith in astrology.”

In regard to the absence of four rebel Congress MLAs, BJP claimed that the government did not enjoy a majority.

The Congress MLAs -Ramesh Jarkiholi, Mahesh Kumathahalli, Umesh Jadhav and B Nagendra—and MLA J N Ganesh, who is absconding after a brawl with a colleague at a Bengaluru resort.

At present, the alliance enjoys the support of 117 MLAs- 79 of the Congress, 37 of JD(S) and onelegislator of the BSP.

Meanwhile, BJP has the support of 104 MLAs.

“The BJP doesn’t believe in democracy, if it did its MLAs wouldn’t have disrupted the governor’s speech,” he said.

The former chief minister said the Congress would take a decision on the rebels after the CLP meeting at 9 am on Friday.

However, former chief minister and state BJP chief B S Yeddyurappa, stuck to the party’s claim that the government did not enjoy a majority.

“This government doesn’t have a moral right to present the budget. The people of the state don’t have confidence in this government because Congress leaders keep saying Siddaramaiah is their chief minister,” he said.