The letter was written by the then French Prime Minister Manuel Valls on September 8, 2016. 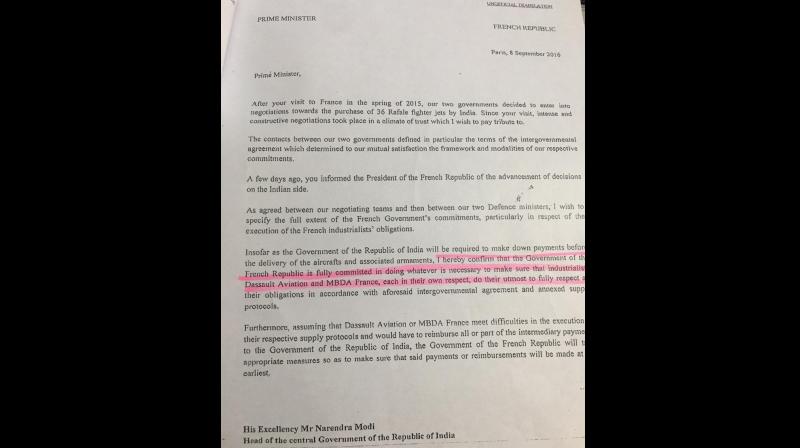 The Congress and the opposition have been attacking the government on the issue of not taking a sovereign guarantee from the French side. (Photo: ANI)

New Delhi: At a time when the government is facing backlash for not getting sovereign guarantee from France in the Rafale jet deal, it is emerging that the then French prime minister had written a letter to Prime Minister Narendra Modi, saying that their government would fully back the obligations made by their firms in the contract.

"I hereby confirm that the government of the French republic is fully committed in doing whatever is necessary to make sure that Dassault Aviation and MBDA of France, each in their own respect, do their utmost to fully respect their obligations in accordance with aforesaid inter-governmental agreement and annexed supporting protocols," said the letter in possession of ANI.

The letter was written by the then French Prime Minister Manuel Valls on September 8, 2016.

"The contacts between our two governments defined in particular the terms of the inter-governmental agreement which determines to our mutual satisfaction the framework and modalities of our respective commitments," the French prime minister said.

The Congress and the opposition have been attacking the government on the issue of not taking a sovereign guarantee from the French side.

A document has also been cited in media reports which suggested that some members of the negotiating team had expressed reservations on the issue in writing.

"As agreed between our negotiating teams and then between our two defence ministers, I wish to specify the full extent of the French government's commitments particularly in respect of the execution of the French industrialists' obligations," the French prime minister had stated.

The deal was signed in September 2016 in which India agreed to pay more than Rs 59,000 crore for 36 Rafale combat aircraft.