In the last poll, the AAP had won 67 seats, the BJP 3. Congress didn't open its account 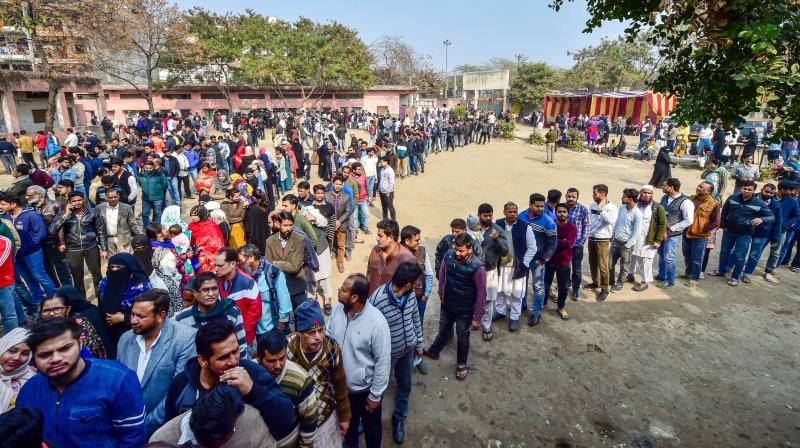 Voters wait in queues outside the Abul Kalam Azad school polling station in Shaheen Bagh area, which has been witnessing a peaceful protest against the Citizenship Act for several weeks, during the Delhi Assembly elections, in New Delhi. PTI photo

In an interesting trend, long voter queues were seen at Delhi's Shaheen Bagh, the epicentre of anti-CAA campaign.

Over 1.4 crore people are eligible to cast their votes in the Delhi Assembly election.

Key politicians including External Affairs Minister S Jaishankar and Delhi Chief Minister Arvind Kejriwal on Saturday queued up outside polling booths to exercise their franchise for Assembly polls in the national capital.

Jaishankar cast his vote at NDMC School of Science and Humanities Education at Tuglak Cresent whereas Kejriwal along with his wife - Sunita Kejriwal, mother and son, a first-time voter, cast their votes at a booth in Civil Lines.

The city is witnessing a triangular contest among the ruling AAP, which won a landslide majority in the last elections, the BJP and the Congress. In the last poll, the AAP had won 67 seats, the BJP 3. Congress didn't open its account.

Similarly, the BJP is hopeful to gain a majority by cashing in on the popularity of Prime Minister Narendra Modi.

The Congress, which was in power for 15 years at a stretch in Delhi under the leadership of former Chief Minister late Sheila Dixit till the party lost to AAP in 2015 polls, will be hoping for a revival.