Director general of police Dilbag Singh said that the person who threw the grenade has been arrested. 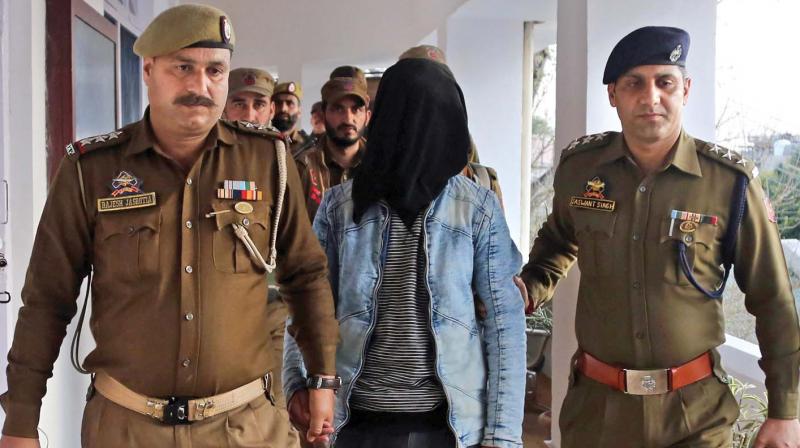 Police take away the man arrested for throwing a grenade, which exploded at a bus stand, after a press conference in Jammu, Thursday. (Photo: PTI)

Srinagar: A teenager from Uttarakhand was killed and 32 people were injured in a grenade blast at Jammu’s main bus terminus on Thursday. Within hours of the incident, police arrested a suspected Hizbul Mujahideen militant for the explosion.

The third grenade attack by terrorists on Jammu bus stand since May last comes just three weeks after the Pulwama terror strike on February 14 that killed over 40 CRPF jawans bringing India and Pakistan on brink of war.

The grenade attack was carried out inside the general bus stand area at around 11.45 am resulting in the death of 17-year-old Mohammad Sharik, a resident of Hardiwar, and injuries to 32 others, including 11 from the Valley, 10 from Jammu and others from outside the state, the police said.

Witnesses said that a youth hurled the grenade towards a stationary J&K State Road Transport Corporation (SRTC) bus and it exploded on the road beneath it, smashing its windscreens.

“The blast occurred when there was a huge rush of people. I had come to drop my wife who was going to board a bus to Punjab,” said one of the injured, Kuldeep Singh from the Pragwal area of the city.

Mr Singh and his wife are undergoing treatment at Government Medical College(GMC) hospital for injuries.

Director general of police Dilbag Singh said that the person who threw the grenade has been arrested.

He said that immediately after the blast police teams were constituted to work on leads. He said, “CCTV camera footage was examined and based on it and oral testimony of witnesses we were able to identify a suspect. He was soon detained and he confessed to the crime.”

The Hizb, in a statement, denied its involvement in the grenade attack and said that targeting civilians or carrying out such attacks at crowded places is not “our agenda”.

Governor Satya Pal Malik, terming it as a “cowardly dreadful act”, said that he strongly condemns it. He asked the agencies concerned to ensure that those responsible for this act are brought to justice. He announced an ex-gratia of `5 lakh to the next of the kin of the deceased and ` 20,000 each to those injured in the accident.

Meanwhile, the police in Srinagar said that a Jaish-e-Mohammed (JeM) militant, believed to be a Pakistani national, was killed in a firefight with the security forces in Badrah Payen village of Kralgund area in the frontier Kupwara district on Thursday.

The police said that the fighting broke out soon after the security forces launched a cordon and search operation in the village late Wednesday evening following credible input about the presence of militants there.

“As the searches were going on, the hiding terrorists lobbed grenades and fired indiscriminately on the search party. The fire was retaliated leading to a gunfight,” a police statement said.

It also said that from the incriminating materials recovered from the site of the encounter “it is understood that the killed terrorist was a Pakistani national code named Anwar, affiliated to the JeM”.