2 J&K traders in UP thrashed by mob, four held

The victims later told the media that they were satisfied with the police action, which they termed as prompt. 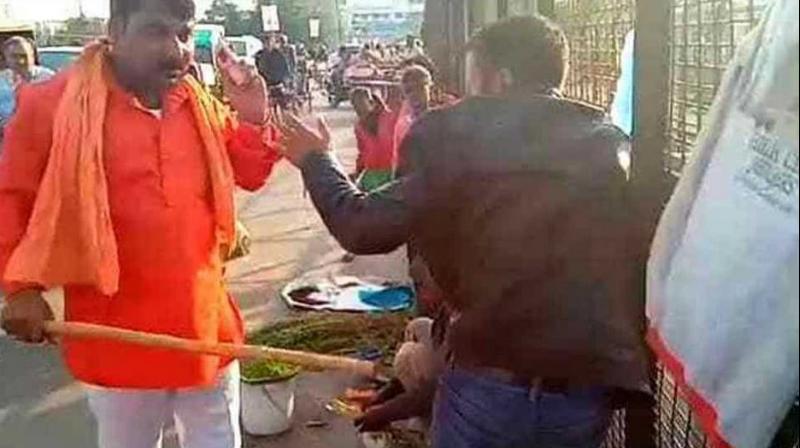 The incident took place at around 5 pm on Wednesday in Daliganj in central Lucknow. (Photo: Screengrab)

Lucknow: Two Kashmiris selling dry fruit were thrashed by a group of saffron-clad men in the Daliganj locality of Lucknow late on Wednesday evening, after which four persons have been arrested, the police said on Thursday.

The incident was the latest in a series of cases in which Kashmiris across the country were targeted after the Pulwama terror attack that killed over 40 CRPF jawans.

The assault on the Kashmiri vendors, which was caught on camera, was strongly condemned by Omar Abdullah and Mehbooba Mufti, former chief ministers of Jammu and Kashmir.

“The Kashmiri youths were selling dry fruit on Daliganj bridge and a group of men beat them up, terming them stone-pelters,” Lucknow SSP Kalanidhi Naithani told reporters here. The local people, however, rushed to their rescue and informed the police, he said.

An “alert citizen” also made a video of the attack, after which police teams swung into action and arrested the main accused, Bajrang Sonkar. Sonkar has more than a dozen criminal cases pending against him, including that of murder, loot, theft and under the Arms Ac, he added.

On a tipoff, three others — Himanshu Garg, Aniruddh and Amar Kumar — were also arrested on Thursday, the SSP said. Sonkar claims to be the president of a little-known outfit called the Vishwa Hindu Dal.

The victims later told the media that they were satisfied with the police action, which they termed as prompt. The SSP said the police wanted to give a stern message that such acts would not be tolerated and those involved would be brought to book.

An FIR was lodged at Hasangaj police station under various sections of the IPC, including 153 (provocation with intent to cause riot), 307 (attempt to murder), and the Criminal Law (Amendment) Act, a police official said.

National Conference leader Omar Abdullah said the assault in Lucknow hurt the very idea of India. “Nothing will do more damage to the idea of India in J&K than videos like these. Keep thrashing Kashmiris like this on the streets at the hands of RSS/Bajrang Dal goons & then try to sell the idea of ‘atoot ang’ (integral part), it simply won’t fly,” he said in a series of tweets.

“Dear PM @narendramodi Sahib, this is what you had spoken against & yet it continues unabated. This is the state governed by your handpicked chief minister. Can we expect action in this case or do we file your concern & assurances as a jumla, meant to placate but nothing more?” he asked.

Mr Abdullah also posed a question to Union home minister Rajnath Singh, who represents Lucknow in the Lok Sabha, asking if he would step in to deliver justice in this case. “Jenab @rajnathsingh Sahib. You represent this constituency in the Lok Sabha, this is the constituency where Vajpayee Sb was elected from & went on to be PM. If no one else will step in & deliver justice, can we expect you to punish those guilty of this assault?” he added.

PDP president Mehbooba Mufti accused the Centre of encouraging such people to polarise society. “Kashmiris are being hounded & punished. The culprits here were clad in saffron kurtas & are from VHD. They have no fear & in fact uploaded the video on SM. GoI’s conspicuous silence is actually a political tactic to encourage such elements & communalise the atmosphere until polls (sic),” she tweeted.

“You humiliate & assault Kashmiris. Make them feel like criminals & that they dont belong to this country. Why are you surprised then when young pliable men are taken under the wings of terror groups & indoctrinated?” she said.