The panel is given eight weeks to arrive at a conclusion and four weeks to give a status report. 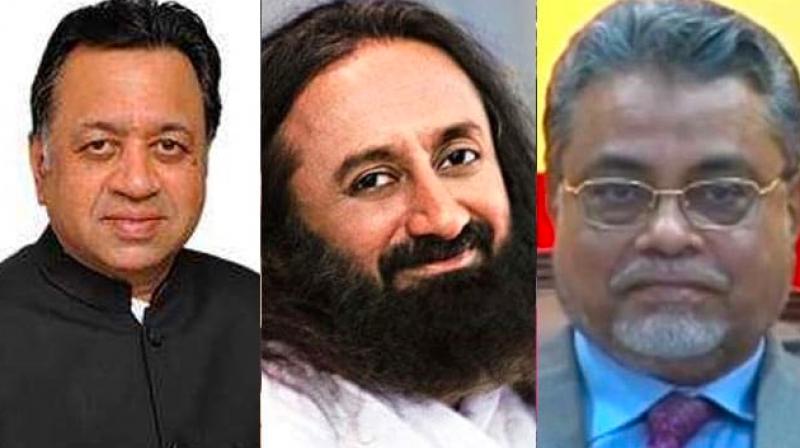 The panel is given eight weeks to arrive at a conclusion and four weeks to give a status report.

He is the son of Late Justice M Fakkir Mohamed, who started his career as an advocate in 1975. He was also an active labour law practitioner. Justice Kalifulla was appointed as a permanent judge of the Madras High Court in 2002 and elevated as judge of the Supreme Court in 2012.

The Supreme Court order for reform of the Board of Control for Cricket in India (BCCI) in 2016 was among the landmark judgment that Justice Kalifulla wrote.

"I understand the Supreme Court has appointed a mediation committee headed by me. I'm yet to receive the order copy. I can say if a committee has been constituted we'll make every effort to resolve the issue amicably," Justice Kalifulla said.

He is a spiritual guru who has been leading a worldwide movement for a violent-free society. He has been advocating for a constructive dialogue between the opposing parties on Ram Mandir issue.

In 2017-18, Sri Sri had offered to mediate the Ayodhya dispute. He held a few rounds of meetings with the parties representing Hindus and Muslims last year. He had said at the time that a Supreme Court verdict might not satisfy the parties and result into “bloodshed”.

On Supreme Court for mediation in Ayodhya case, Sri Sri posted a tweet using hashtag #ayodhyamediation. He said, “Respecting everyone, turning dreams to reality, ending long-standing conflicts happily and maintaining harmony in society - we must all move together towards these goals.”

Respecting everyone, turning dreams to reality, ending long-standing conflicts happily and maintaining harmony in society - we must all move together towards these goals.#ayodhyamediation

Earlier, on Wednesday, after the Supreme Court heard the Ayodhya case, Sri Sri Ravishankar said, "We should keep our egos and differences aside and come together with a spirit of honouring and accommodating the sentiments of the communities concerned."

This move towards mediation by the Hon Supreme Court is in the best interest of the country and all parties concerned. We should not leave any stone unturned in resolving this burning issue amicably.#AyodhyaVerdict
1/2

He is a senior advocate and mediator. He had set up India’s first court-annexed mediation centre in 2005 and played a key role in making mediation a part of India’s legal system. The Supreme Court had referred to him as an “eminent trainer” and “one of the foremost mediators in the country”.