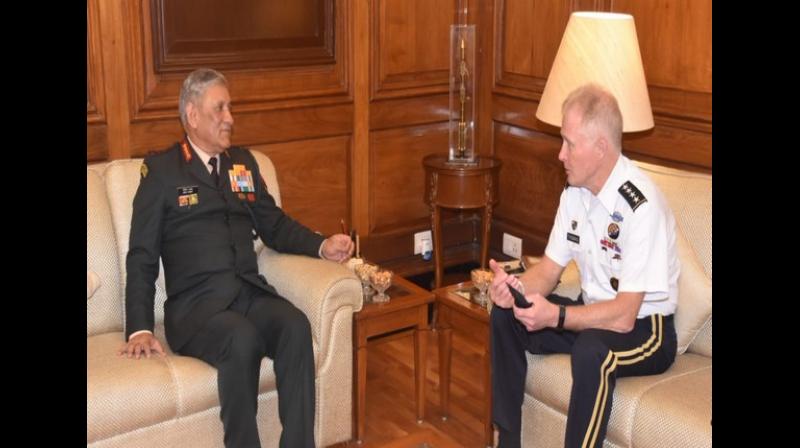 The meeting of two top Generals had come days after India launched a 'pre-emptive' and 'non-military' strike against JeM in Pakistan’s Balakot. (Photo: ANI)

New Delhi: Indian Army on Friday said that to be fully prepared to deal with the "emerging challenges" out of the current scenario of "disinformation campaign" being orchestrated by the "terror sponsors."

“In the current scenario, the Indian Army remains fully prepared for emerging challenges. In the last three weeks, disinformation campaign by the adversary on digital media has increased,” said a spokesperson of the Indian Army in a statement.

“All ranks have been well sensitised of these disinformation campaigns and all ranks can see through the lie, deceit, and deception of the terror sponsors,” he said.

On his official visit to India, General Raymond Thomas, Commander, US Special Operations Command, US Army, on Thursday called on the Army chief General Bipin Rawat.

“Both the Generals deliberated on the developing regional security environment, the issue of global terrorism and Pakistan’s continued support to terrorism was also discussed,” said the statement.

“Acknowledging India’s role in peace and stability in the region, General Raymond emphasised on the need for further military cooperation in the field of technology and military to military exchanges between the two countries,” said the statement further.

The meeting two top Generals had come days after India launched a “pre-emptive” and “non-military” strike against JeM in Pakistan’s Balakot. The fighter jets of the two countries engaged in a dogfight in the skies of Jammu and Kashmir after Pakistani F-16 planes transgressed into the Indian air space.

The United States has reiterated its support to India’s decision to take action against Jaish-e-Mohammad (JeM) terror camp on the soil of Pakistan. India’s air strike on JeM’s largest training centre at Balakot was in retaliation of Pulwama terror attack on February 14 in which 40 jawans were killed.

After the IAF’s air strikes, US Secretary of State Michael Richard Pompeo had said: “I spoke to Pakistani Foreign Minister Qureshi to underscore the priority of de-escalating current tensions by avoiding military action, and the urgency of Pakistan taking meaningful action against terrorist groups operating on its soil.”

Acknowledging Indian actions as “counter-terrorism” action, Pompeo had said: “Following Indian counter-terrorism actions on February 26, I spoke with Indian Minister of External Affairs Swaraj to emphasise our close security partnership and shared the goal of maintaining peace and security in the region.”