Sonia, Rahul on Congress first list of 15 for LS polls

The party also stole a march over the BJP by coming out with a list of 15 candidates from two important states of UP and Gujarat. 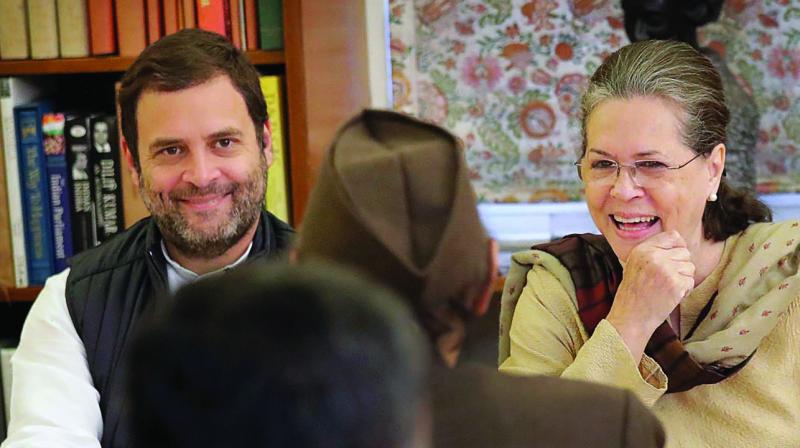 New Delhi: In a surprise move, even before the Election Commission’s formal announcement of the Lok Sabha poll schedule, the Congress on Thursday announced its first list of 15 candidates for the 2019 general election, with UPA chairperson Sonia Gandhi to contest from Rae Bareli and Congress president Rahul Gandhi from Amethi.

The party also stole a march over the BJP by coming out with a list of 15 candidates from two important states of UP and Gujarat. Of the 15 seats, 11 seats have been announced from Uttar Pradesh, while the remaining four have been announced from Gujarat. Also, by announcing candidates for 11 out of the total 80 Lok Sabha seats in UP, the Congress has signalled that it plans to, at least for now, contest in the state on its own.

Interestingly, eight of the 11 seats from UP where the candidates have been announced are among the 21 seats which the Congress bagged in the state in the 2009 polls.

In these eight seats, the Congress has repeated its 2009 winners, namely Jitin Prasada from Dhaurahra, Salman Khurshid from Farrukhabad, R.P.N. Singh from Kushinagar, Annu Tandon from Unnao, Raja Ram Pal from Akbarpur and Nirmal Khatri from Faizabad, apart from the UPA chairperson and the Congress president.

For the coming 2019 general election, the Congress has decided to specially focus on the 21 seats which it had won in Uttar Pradesh in 2009. Apart from this, the party will also aggressively contest in those seats where it had finished a close second 10 years back.

In Gujarat, the Congress announced candidates from four Lok Sabha seats, with former Union minister Bharatsinh Solanki from Anand, the seat he had won in 2009. The others are Raju Parmar from Ahmedabad West, Prashant Patel from Vadodara and Ranjit Rathwa from Chhota Udaipur.

The list was finalised at the meeting of the Congress’ central election committee which was held on Thursday.

It was the first meeting of the CEC, which got postponed from February 27 in the wake of the Pulwama attack and the airstrikes across LoC by the Indian Air Force.

The CEC, which is headed by Rahul Gandhi, is expected to finalise the candidates from Maharashtra at its meeting to be held on Friday.