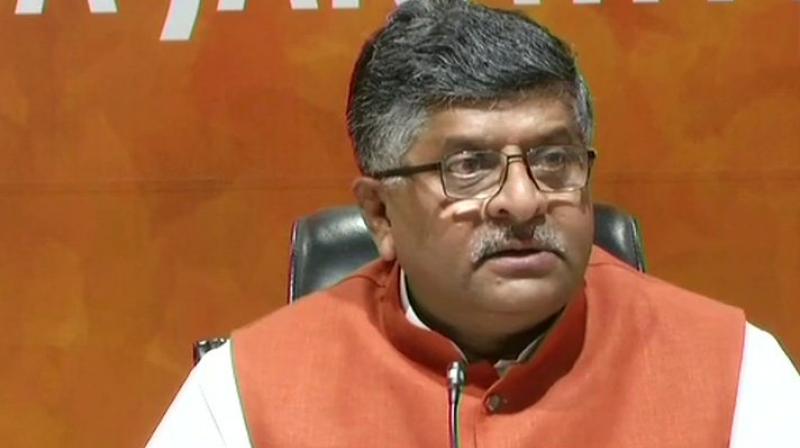 New Delhi: The BJP on Sunday claimed that it was the only "pro-Dalit" party and accused opposition parties, including the Congress and the BSP, of abetting violence over issues concerning the community as part of a conspiracy to vitiate the atmosphere.

The BJP fielded Union ministers Ravi Shankar Prasad and Thawarchand Gehlot to launch a counter attack on opposition parties, which have targeted the saffron party over Dalit issues. They accused Congress chief Rahul Gandhi of fuelling the fire with his "lies and rumour-mongering".

The BJP leaders, however, parried queries on the statements of several Dalit MPs of their party, with Prasad maintaining that the party would talk to them and listen to their concerns.

Violent protests during a 'Bharat Bandh' called by several Dalit groups on April 2 left at least 11 people dead. It brought to fore the grievances of the community and also triggered a war of words between the opposition and the ruling BJP.

Gehlot, the most prominent Dalit leader of the BJP, said Dalit icon Bhimrao Ambedkar and BSP founder Kanshi Ram never supported violent protests as he attacked the Congress and the Mayawati-led BSP.

Prasad accused the two parties besides the Samajwadi Party of abetting violence as part of a conspiracy and said they were politicising the matter to polarise the country. "The opposition should not work to divide the country for political interests," he said. The BJP's charge was that the matter was being politicised as Prime Minister Narendra Modi came from a poor family and the BJP had largest number of Dalit and tribal MPs and MLAs in its fold.

Prasad claimed that the maximum violence was seen in those parts of Madhya Pradesh and Rajasthan where the Congress and the BSP had influence.

Opposition parties were trying to spread bitterness, casteism and regionalism in the country to target the BJP, he alleged.

Gehlot said the Narendra Modi-led government had strengthened the SC and ST (Prevention of Atrocities) Act with amendments in 2016 and done a lot to celebrate Ambedkar's legacy, including observing his birth anniversary with year-long events and building memorials in places linked to him.

Citing Gandhi's reported comments that the act had been abrogated, Prasad alleged that he was fuelling the fire with his lies.

To a question about Gandhi's planned fast, he said that the Congress leader had a right to do so but should refrain from spreading rumours.

Gehlot said Modi had been able to make his image of a "messiah" for weaker sections of the society, causing heartburn in the opposition.

Parties like the Congress and the BSP did nothing for Dalits and at times even worked against their interests, Prasad and Gehlot alleged.

It was Mayawati who as the Uttar Pradesh chief minister in 2007 wrote to the state police to stop misuse of the act while the Congress did not accord Bharat Ratna to Ambedkar for decades following his death in 1956, Prasad claimed.

Taking a dig at the Congress, he said the party had now discovered love for Ambedkar.

Citing the government's work to empower Dalits, Gehlot said the BJP was the only pro-Dalit party.