India   All India  08 Apr 2018  IPL in Chennai an embarrassment when Cauvery protests on: Rajinikanth
India, All India

IPL in Chennai an embarrassment when Cauvery protests on: Rajinikanth

Rajinikanth and Kamal Haasan assembled in Chennai on Sunday demanding the formation of Cauvery Management Board. 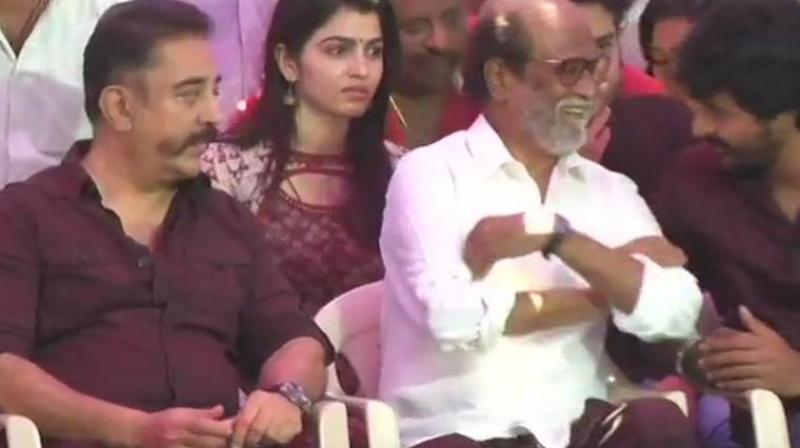 Chennai: The Cauvery issue has brought together some of the top names of the Tamil Nadu film fraternity on a common platform. Superstars-turned-politicians Rajinikanth and Kamal Haasan assembled in Chennai on Sunday demanding the formation of the Cauvery Management Board (CMB), in accordance with the Supreme Court’s directions.

Speaking to reporters outside his home, Rajinikanth said that organising Indian Premier League (IPL) matches in the city was an “embarrassment” at a time when the people of the state were protesting over the Cauvery issue.

According a report in NDTV, he also said that IPL players and spectators should be allowed to sport black bands to register their protest.

The 67-year-old actor also warned the Centre that it would earn Tamil Nadu’s wrath if the CMB was not constituted on an immediate basis. “There has already been a delay,” the actor said.

Apart from Rajinikanth and Kamal Haasan, a host of actors including Dhanush, Vijay, Suriya, Sathyaraj, Sivakumar, Nassar, Vishal, Karthi and Sivakarthikeyan participated in protest being held at Chennai's Valluvar Kottam.

In recent days, stirs, protests, shutdown and hunger strikes have been carried out in the state by political parties over the issue. Farmers’ agitations have also been witnessed across the state.

A group of farmers in Trichy partially buried themselves in sand on the banks of the Cauvery River on Friday demanding the setting up of Cauvery board.

On Thursday, opposition parties in Tamil Nadu, including the main opposition held a day-long shutdown in the state.

The ruling AIADMK had also called for a hunger strike on Tuesday.

On 16 February 2018, the Supreme Court had asked the Centre to form the CMB to implement a formula for sharing of water between Tamil Nadu and Karnataka.

In the ruling, the top court reduced Tamil Nadu's share in the Cauvery water to 177.25 thousand million cubic feet.