In a bid to pacify his ally, BJP chief Amit Shah said that he hopes the Uddhav Thackeray-led party will continue to remain in the NDA fold. 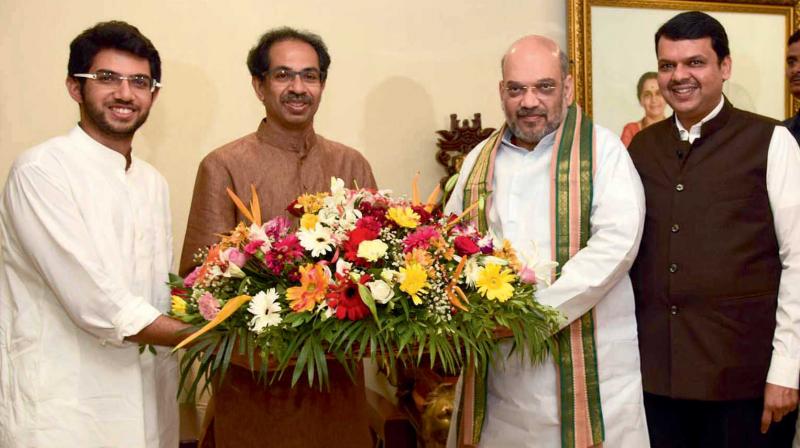 In January, the Sena had announced it will not align with the BJP and go solo in the 2019 Lok Sabha and Maharashtra Assembly polls. (Photo: File)

Mumbai: The Shiv Sena has indicated that there will be no change in its strategy of contesting alone in the 2019 polls after BJP chief Amit Shah reached out to his bickering ally in a bid to pacify.

Addressing a public rally in Mumbai on April 6, Shah had said the BJP hopes that Uddhav Thackeray-led party will continue to remain in the NDA fold.

"They (Sena) are in the government with us now, and it is our strong desire that they remain with us," Shah had said. In January, the Sena had announced it will not align with the BJP and go solo in the 2019 Lok Sabha and Maharashtra Assembly polls. The Sena is currently part of the BJP-led ruling coalitions in Maharashtra as well as at the Centre, but it has often criticised both governments' decisions and policies.

Senior Sena leader Subhash Desai has said the BJP has suddenly changed its tone and is now talking about its allies in the NDA.

"Even in 2019, we will form an NDA government though the BJP will win a majority (on its own in Lok Sabha polls)," Shah had said at the rally.

"The BJP, which all along said it would come to power on its own, is now remembering its friends. Its tone has changed in the past six months. It now talks about the NDA," Desai said at a public meeting in adjoining Thane on Saturday night.

Thackeray was the "most popular" leader in the state and the party, under his leadership, would capture power on its own strength, Desai said. "The Sena chief has said we will fight the polls alone and all Sainiks should works towards that aim," he said.

A Sena office-bearer said the party has no intention to change its political line of contesting all future polls independently. He said the BJP has a policy of using its allies for political gains and then discarding them.

"In Goa, they (BJP) used Maharashtrawadi Gomatak Party (MGP) to grow and in Maharashtra, it expanded its base with Shiv Sena's help. But, the Shiv Sena is not the MGP," said the office-bearer, who preferred to remain anonymous.

"Not just the Shiv Sena, but the entire country is witnessing the BJP's arrogance," he said. The Sena will also have nothing to do with NCP chief Sharad Pawar and Congress president Rahul Gandhi, the office- bearer maintained. However, the BJP does seem perturbed by Sena's cold-shouldering.

A state BJP leader said the rank and file is enthused by the good response the party's rally on its 38th foundation day in Mumbai on April 6 received. The rally saw "unprecedented" turnout of BJP workers from different parts of the state, he said.

"The event has enthused the cadre and going by the participation, the Shiv Sena should realise the BJP may not require it at all (in polls)," the BJP leader said on condition of anonymity.