India   All India  08 Apr 2018  What we said earlier will be proved if Justice Gogoi is not made CJI: SC top judge
India, All India

What we said earlier will be proved if Justice Gogoi is not made CJI: SC top judge

Justice Chelameswar, the senior-most judge after the CJI, said the January 12 press conference was the result of 'anguish' and 'concern'. 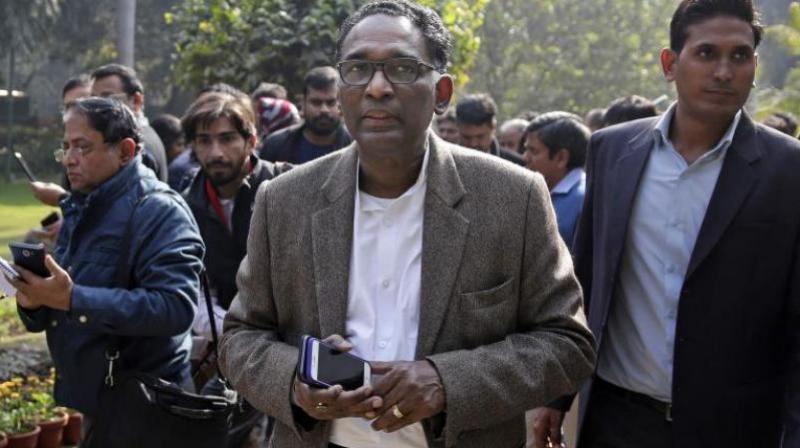 'The CJI has the authority to constitute the benches but under constitutional system every power is coupled with certain responsibilities. The power is required to be exercised not because it exists but for the purpose of achieving public good. You don't exercise the power merely because you have it,' the apex court judge said. (Photo: File)

New Delhi: Justice J Chelameswar, who courted controversy by virtually revolting against Chief Justice of India Dipak Misra, on Saturday said that impeachment cannot be an answer to every question and problem and there was need to correct the system.

Justice Chelameswar, the senior-most judge after the CJI, said the January 12 press conference he held along with justices Ranjan Gogoi, M B Lokur and Kurian Joseph, was the result of "anguish" and "concern" as their deliberations with the CJI did not achieve the desired results on the issues raised by them regarding the functioning of the top court.

The judge, who was holding a talk on the topic 'Role of judiciary in democracy', also answered questions on the priority of the CJI in constituting benches and allocating cases to different judges as the 'master of roster'.

"The CJI is the 'master of roster'. Undoubtedly, the CJI has this power. The CJI has the authority to constitute the benches but under constitutional system every power is coupled with certain responsibilities. The power is required to be exercised not because it exists but for the purpose of achieving public good. You don't exercise the power merely because you have it," he said.

He replied in affirmative when asked whether the power of setting up of benches and allocation of cases should be exercised arbitrarily.

Asked by eminent journalist Karan Thapar, who was in conversation with the judge, if there is "sufficient ground for seeking impeachment of the Chief Justice of India", Justice Chelameswar said: "Why this question is asked?"

"The other day, someone was asking for my impeachment. I don't know why this nation is worried about impeachment so much. In fact we (along with Justice Gogoi) wrote in the judgement of Justice C S Karnan that apart from that there must be mechanisms to put the system in order."

"Impeachment can't be the answer for every question or every problem. A few days ago I heard somebody asking for my impeachment. Like the saying goes, I don't agree with you but I shall protect your right to say so," he said.

His response came in the backdrop of moves by opposition parties to initiate impeachment proceedings against the CJI. No CJI has ever faced impeachment in the country.

On being asked whether he was apprehensive or feared that Justice Gogoi, who was part of the November 2017 letter written to the CJI and the presser, will not be elevated as the next CJI, Justice Chelameswar said he hoped it does not happen and if it happened, it will be proved that what they said in the January 12 press conference was "true".

"I am not an astrologer... I am not (worried). I hope that does not happen (Justice Gogoi being denied CJI's position). If it happens, it will only prove what we said in the press conference was true," he said.

Regarding the current status of the collegium, whether it's divided 4:1 or dismantled after the discord between the four seniormost judges and the CJI, Justice Chelameswar said the five judges who are part of collegium met last evening as well as last week and even if they have differences, this does not mean they don't see eye to eye.

"None of us are fighting for private property. Differences are on institutional issues, that does not mean that we do not see eye to eye," he said.

In the programme organised by Harvard Club of India, which consist of people who have studied from the American university and are residing here, the judge made it clear that after his retirement on June 22, he would "not seek any employment from the government".

"I am saying it on record that after my retirement on June 22, I will not seek any appointment from the government," he said.

Thapar's conversation with Justice Chelameswar which lasted for 70 minutes was focused on all the recent controversies ranging from appointment of judges to higher judiciary to setting up of benches and allocation of cases on preferential basis, hearing on sensitive cases like judge B H Loya's death, turf war between judiciary and executive over the Memorandum of Procedure.

When asked his view on the criticism being made for going public with the presser on the functioning of the institution, he said anybody who enters public office cannot avoid criticism and there was no such principle barring judges interacting with the media.

"Anybody who enters a public office can never avoid criticism. And I was wondering where this principle come from? What was the context that this principle came from? Judges were not expected to debate in the press about the judgements," he said.

"I go somewhere, press would be there, they report something and if I interact with them, is it prohibited? Similarly we were talking about the administrative problems. We were not breaching any of the time-honoured principles that we should not address the press," he said.

Justice Chelameswar refused to answer whether preferential benches were chosen to benefit the government.

"I am not answering this question," he replied.

He also avoided answer to a question that the preferential benches are constituted to get an order or judgement which the chief justice desired.

When asked whether the selective allocation of cases is undermining the faith in the institution, he said "I believe so" and "if the process is not transparent, it will lead to suspicion".