At present, as many as 304 persons are active cases of Covid-19 positive 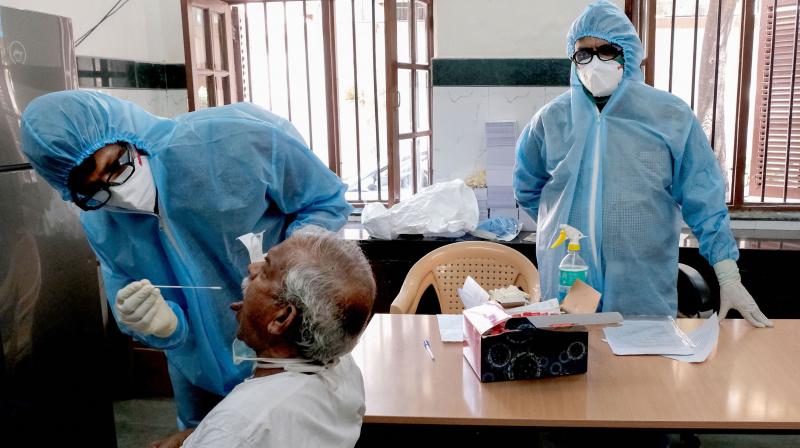 Vijayawada: Another person died in Andhra Pradesh on Tuesday due to Coronavirus (Covid-19) disease, taking total number of deaths in state to four, even as 10 more new cases were confirmed tested positive.

A 45-year old man, who was admitted to the government hospital in Kurnool on April 1, had his samples sent for testing and found to be Covid-19 positive. He died on April 3. He was suffering with type 2 diabetes and has no history of travel, the government confirmed today.

With eight more new positive cases reported in Guntur city, and a total of 41 cases in the district, officials have declared more areas of Guntur city as hotspots or red (containment) zones.

Guntur district collector I. Samuel Anand Kumar said that out of total 41 positive cases in the district, 27 cases were detected in Guntur city. He said that Mangaladas Nagar, Kummari Bazar, Anandpet, Buchaiah Thota, Nallacheruvu, Sangadigunta, Srinivasarao Thota, Auto Nagar, LB Nagar and Koritapadu of Guntur city have been declared as red zones and appealed to people to stay indoors.

Mr Kumar appealed to people who returned from Tablighi Jamaat’s Markaz in Nizamuddin in New Delhi to come forward voluntarily for medical care immediately. He further said that persons who were suffering from Coronavirus symptoms should also come forward for medical observation.

He directed all registered medical practitioners (RMPs) to shut down their clinics immediately. He asked private doctors to inform of any suspect case with Coronavirus symptoms to concern authorities immediately without fail.

Expressing concern that people were wandering in red zones, despite arranging barricades, he said that complete lockdown was being imposed in entire Guntur city, with only three main roads being open for emergencies.

Mr Kumar said that relaxation time has been reduced to 6 am to 9 am from earlier slot of 6 am to 11 am. He asked public to purchase vegetables and essential commodities once for four days and to follow lockdown norms strictly.

Guntur urban DIG P.H.D. Ramakrishna warned that police would register cases against parents if youth and minors come onto roads on bikes, violating lockdown norms. He said that people should stop roaming in red zone areas.

In Kadapa district, a Covid-19 positive case was reported from Proddutur town. The male patient was a relative of a person who was tested positive earlier. The patient was sent for quarantine at the Fathima Medical College.

Health authorities said that number of testing labs have gone up, with addition of three more at Visakhapatnam, Kadapa and Guntur recently. With this, as many as 1,170 tests are being carried out per day in the state.

As part of surveillance, authorities have carried out surveillance on 1.41 crore households, out of a total of 1.46 crore households in the state. As many as 6,170 persons were reported to be symptomatic and were kept in home isolation and are being treated.

As many as 1,042 persons, who attended the Tablighi Jamat’s Markaz event in Delhi were identified and provided with medical care. With an exception of 45 persons, all remaining persons have been tested, out of which 196 were found to positive for Covid-19. This is out of the total number of 304 positive cases in the state so far.

At present, as many as 304 persons are active cases of Covid-19 positive. Out of them, 292 are in stable condition, one patient in ICU, while six persons have been discharged after recovery.