While the number of active COVID-19 cases is 4,643, as many as 401 people were cured and discharged 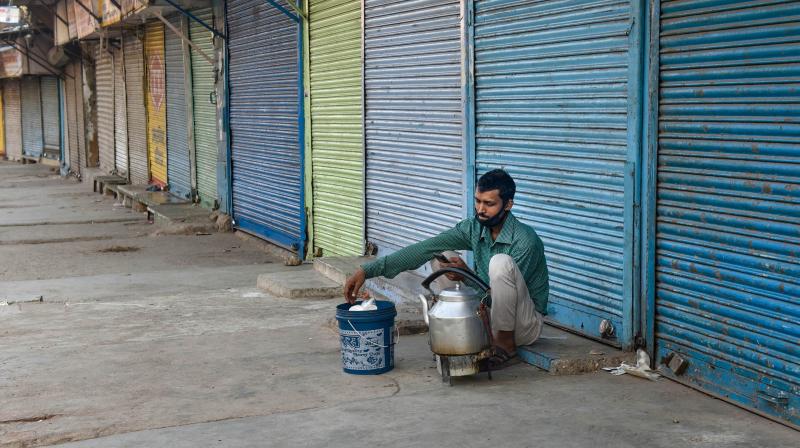 A man sits outside the closed shops at Khari Baoli Road during the nationwide lockdown, imposed in wake of the coronavirus pandemic, in New Delhi. PTI photo

New Delhi: The death toll due to the novel coronavirus rose to 149 and the number of cases to 5,194 in the country on Wednesday, according to the Union Health Ministry.

While the number of active COVID-19 cases is 4,643, as many as 401 people were cured and discharged and one had migrated, it said.

The total number of cases include 70 foreign nationals.

According to the ministry's data updated at 9 a.m., 25 new deaths have been reported since Tuesday.

Sixteen deaths were reported from Maharashtra, two each from Delhi, West Bengal, Haryana and Tamil Nadu and one from Andhra Pradesh.

Maharashtra has reported the most coronavirus deaths at 64, followed by Gujarat  and Madhya Pradesh at 13 each and Delhi at 9.

Telengana, Punjab and Tamil Nadu have reported seven fatalities each.

Two deaths each have been reported from Jammu and Kashmir and Kerala.

Bihar, Himachal Pradesh and Odisha reported one fatality each, according to the health ministry data.

However, a PTI tally of figures reported by various states as on Tuesday 9.45 p.m. showed 5,192 testing positive across the country and at least 162 deaths.

There has been a lag in the Union Health Ministry figures, compared to the numbers announced by different states, which officials attribute to procedural delays in assigning the cases to individual states.

The highest number of confirmed cases in the country are from Maharashtra at 1018, followed by Tamil Nadu at 690 and Delhi with 576 cases.

Telengana has reported 364 COVID-19 cases followed by Kerala at 336.

Novel coronavirus cases have risen to 229 in Madhya Pradesh, 175 in Karnataka and 165 in Gujarat.

Haryana has 147 cases, Jammu and Kashmir has 116, West Bengal has 99 and Punjab has 91 positive patients so far. Odisha has reported 42 coronavirus cases.

Thirty- eight people were infected with the virus in Bihar while Uttarakhand has 31 patients and Assam 27.

Chandigarh  and Himachal Pradesh have 18 cases each while Ladakh has 14 positive patients so far.

Ten cases each have been reported from the Andaman and Nicobar Islands and Chhattisgarh.

Tripura, Mizoram and Arunachal Pradesh have reported one case each.