Till Tuesday, eight deaths were reported from Pune 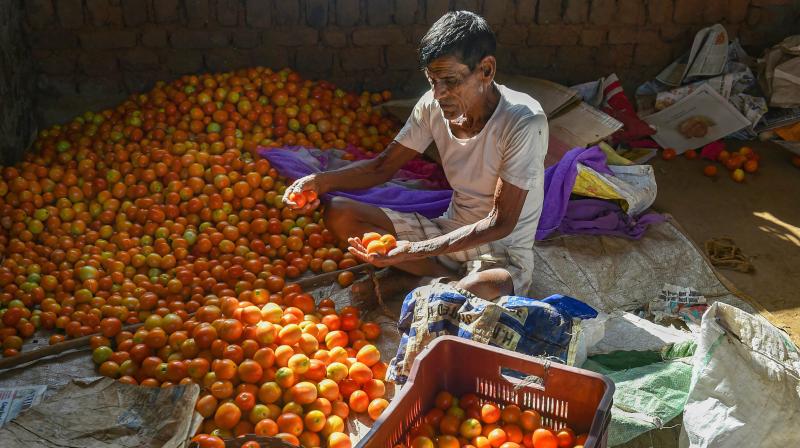 Farmers sort tomatoes near a field before being be transported to other cities, during the nationwide lockdown imposed in wake of coronavirus pandemic, at Murbad Taluka in Thane. PTI photo

Pune: Six coronavirus patients died in Pune since Tuesday night, taking the COVID-19 death toll in the district to 14, a senior official said here on Wednesday.

Four patients died at the Sassoon GeneralHospital, and one each at Naidu Hospital and Nobel Hospital, said Pune Municipal Commissioner Shekhar Gaikwad.

All six had some or other co-morbidity (existing health issue), officials said. A 44-year-old man, who was on ventilator support and alsosuffering from severe diabetes, died at the civic- runNaidu Hospital early Wednesday morning. He had been admitted to the hospital on April 4.

On Tuesday night, he found it difficult to breath and was put on ventilator support. He died in the morning following renal failure, Gaikwad said.

At the government-run Sassoon Hospital, a 54-year-old coronavirus patient died.

"After his swab test came out positive, he was referred to Sassoon on Tuesday night. He had diabetes along with pneumonia and died in the wee hours of Wednesday," said Divisional Commissioner Deepak Mhaisekar.

A 73-year-old man died at Nobel Hospital. "He was admitted to the hospital on April 2. He was critical for last two days. He succumbed on Wednesday morning. He also had hypertension and diabetes," Mhaisekar said.

The details of other deceased persons were awaited.