India   All India  08 May 2017  Massive corruption by AAP in ticket distribution for Punjab polls: Kapil Mishra
India, All India 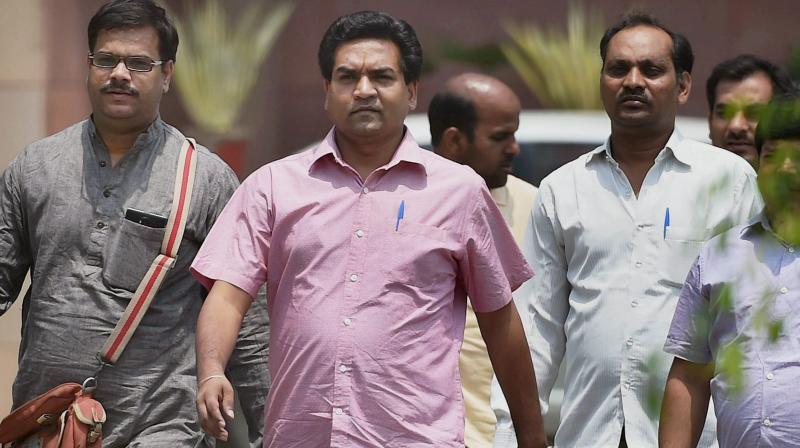 New Delhi: Sacked minister Kapil Mishra on Monday dared the Aam Aadmi Party to sack him even as he fired a fresh salvo at Delhi Chief Minister Arvind Kejriwal, saying a Rs 50 crore deal was arranged for the AAP chief's brother-in-law.

Asserting that bogus bill amounting to Rs 10 crore was made to favour Kejriwal's brother-in-law, Mishra also alleged that during the Punjab polls, there was massive corruption done by AAP in ticket distribution, including supplying of liquor by party members.

He also alleged AAP leader Sanjay Singh was involved in lobbying for overseas funding of the party.

The sacked leader had yesterday accused Kejriwal of taking Rs 2 crore from his cabinet colleague, a charge refuted by Deputy CM Manish Sisodia.

Mishra, who earlier today submitted documents to the Anti-Corruption Branch (ACB) against Kejriwal in connection with the alleged water tanker scam, said he has sought an appointment with the CBI tomorrow to register a complaint.

Addressing a press conference here, Mishra asserted he will never leave the AAP, but said he will also never join the BJP in his life.

He also claimed that since he has made accusations against Kejriwal, he has been receiving death threats from those who are close to the chief minister.

"Satyendar Jain told me that he has arranged a 7-acre land deal in Chattarpur for Arvind Kejriwal's brother-in-law's Bansal family. Being a PWD minister, he also fudged bills up to Rs 10 crore in the department to benefit Kejriwal's relative," Mishra told reporters here.

Slamming the chief minister, Mishra said that Kejriwal does not want to resign.

"Kejriwal's weakness is his chair. He does not want to leave his chair. I want to ask Kejriwal if he will resign the day when Jain is sent to jail in a corruption case," he said.

Rejecting the AAP's allegation that he has been in touch with BJP leaders, Mishra also dared the party to prove the same, adding that whoever raises voice against AAP leaders, he or she is called "a BJP agent".

He said he was the only one in the AAP who strongly opposed the BJP and the Modi government's policies.

"There are four to five persons in the AAP's Political Affairs Committee (PAC) who are indulging in corruption. I have got to know that PAC will throw me out of the party in the evening.

"I will not accept the decision of PAC which takes the same in a closed room. The AAP is not the party of four to five persons and it is the people's party and people will decide who should remain in AAP," Mishra said.

"I challenge the AAP to make public the files pertaining to decisions they have taken in the last two years. There has been no case of corruption against me so far," he said.

Earlier in the day, Mishra said he had shared with the ACB all the evidence related to the tanker scam that dates back to Congress leader Sheila Dikshit's tenure as chief minister.

"I told the ACB officials how Chief Minister Arvind Kejriwal deliberately delayed the report and how public money was misused.

"Also, I told them how Kejriwal along with his two men affected the tanker scam probe. The government also tried to shield Sheila Dikshit again and again. ACB will call me again for a detailed investigation," he told reporters after the meeting," he said.

The bombshell prompted calls from the BJP and Congress for Kejriwal's ouster, but AAP stood solidly behind its leader, insisting there was no merit in the allegation.

The Rs 400 crore tanker scam relates to alleged irregularities in the hiring of private tankers to supply water.