J&K: 7 millitants killed in multiple clashes with Army along LoC 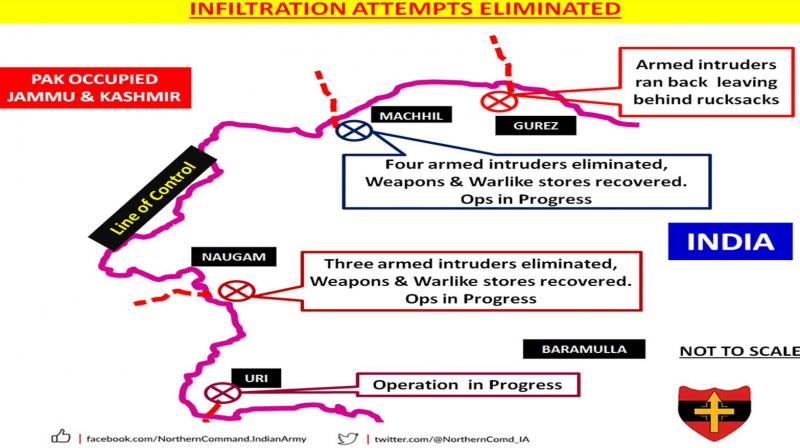 Srinagar: At least seven militants have been killed in a series of clashes with the Army troops along the Line of Control in Jammu and Kashmir’s Baramulla, Bandipora and Kupwara districts during the past two days. One Army jawan has also died while fighting the infiltrating militants, officials in Srinagar said.

The Army said it has foiled “multiple attempts” made by Pakistan army to push armed infiltrators across the LoC. “In the last 48 hours, infiltration attempts have been foiled at Gurez, Machael, Nowgam and Uri sectors after eliminating seven armed intruders, so far”, Udhampur-based defence spokesman Colonel NN Joshi said.

He added that large quantity of arms, ammunition and war like stores have been recovered. “Operations are in progress at Machael, Nowgam and Uri sectors,” he said adding “These armed intruder groups were being provided active support including covering fire (heavy calibre artillery) by Pakistan army posts on the LoC to assist them in infiltration into the Kashmir Valley”.

The spokesman said that during this year, so far, as many as 22 infiltration attempts have been foiled and 34 armed intruders killed by the Indian Army along the LoC. “Relentless operations by security forces have defeated desperate attempts by Pakistan and its agents to spread terror in Jammu and Kashmir during the holy month of Ramadan,” he asserted.

The Army sources said that three militants and an Army jawan were killed in a fire fight with the infiltrating militants in Nowgam sector on Thursday.

Earlier on Wednesday, three militants were killed in a similar clash with the Army in Machael sector. The Army officials here had said that the trio was part of a heavily armed group of infiltrators which had sneaked into Jammu and Kashmir from PoK overnight but was confronted by the Army troops deployed in the frontier region.

The soldiers from the Army 56 Rashtriya Rifles engaged the militants during a cordon-and-search operation launched in Sardari Nad forest area of Macheal after they learnt about the infiltration. The militants hiding in the woods opened fire, triggering an encounter which is still underway.

On May 26, the Army had claimed killing two members of Pakistan Army’s Border Action Team (BAT) in Baramulla’s Uri sector whereas six militants were gunned down in the same sector a day later.