The statement by Owaisi came after 12 of the 18 Congress MLAs on Thursday crossed over to Chief Minister K Chandrashekar Rao's TRS. 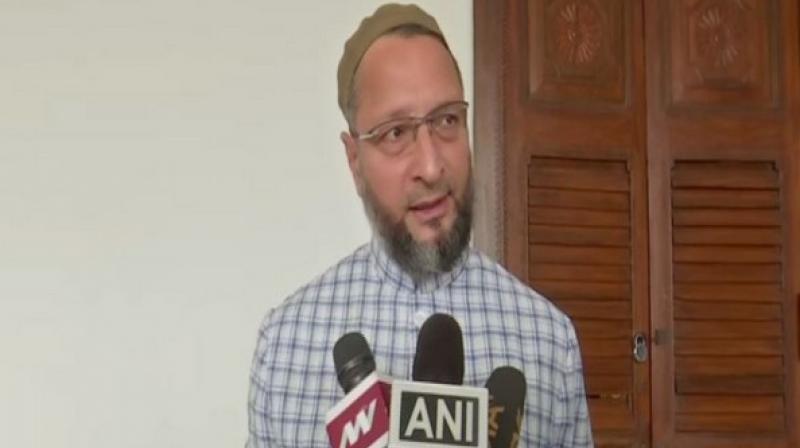 Owaisi said the decision of the Congress MLAs to shift their loyalty to TRS was justified as the law allowed them to do so. (Photo: ANI)

Hyderabad: All India Majlis-e-Ittehadul Muslimeen (AIMIM) chief Asaduddin Owaisi on Saturday said his party will demand the leader of opposition post in Telangana assembly since Congress is no longer the second biggest party.

"We would request the Speaker of Telangana to give our party the leader of the opposition post because we have 7 MLAs in the state, making us the second biggest party. In Delhi BJP has been given the post even though they have just 3 MLAs out of a total 70, we will meet the Speaker soon," Owaisi said.

The statement by Owaisi came after 12 of the 18 Congress MLAs on Thursday crossed over to Chief Minister K Chandrashekar Rao's Telangana Rashtra Samiti (TRS).

Owaisi said the decision of the Congress MLAs to shift their loyalty to TRS was justified as the law allowed them to do so.

"The law allows them to change their loyalty if there is a two-thirds majority... there is nothing wrong in Congress leaders choosing to join TRS."

"Congress still has time to introspect, they should find the reason why people are leaving them. In politics, if you are weak someone else will enjoy the benefits. In Andhra Pradesh, (Chandrababu) Naidu took many MLAs and MPs from Jagan's party, why was the Congress then silent?" he added.

On being questioned about Reddy's decision to appoint five deputy Chief Minister's in the state, Owaisi termed it a "wonderful decision" and said it was a great shift forward in the right direction.

"Jaganmohan Reddy has done a wonderful thing by appointing five deputy Chief ministers in Andhra. It is an excellent gesture through which every caste and minority has been given representation, this will send a positive message. Naidu's government focused on just one caste which was bad," Owaisi said.