PM Modi's visit to Kerala comes at a time when Rahul Gandhi is on a three-day visit to his parliamentary constituency of Wayanad. 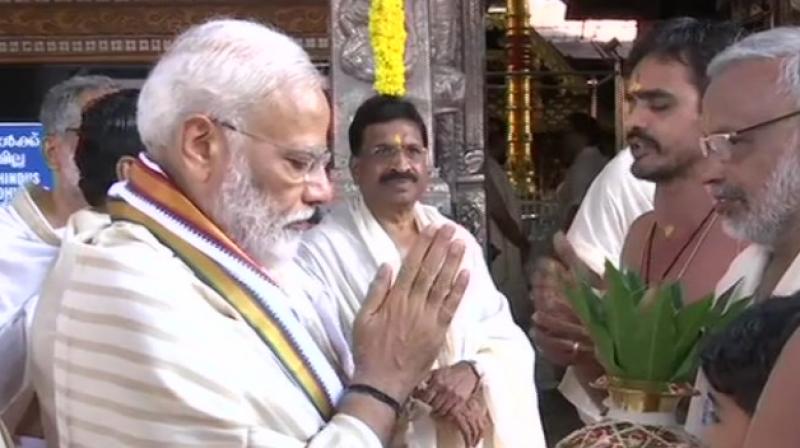 Prime Minister will later proceed for his state visit to the Maldives, a day after which he is slated to visit Sri Lanka. (Photo: Twitter)

He also performed the thulabharam ritual for which the temple authorities had reportedly arranged over 100 kg of lotus flowers.

The ritual is an important offering to Lord Krishna wherein a person is weighed against a commodity such as flowers, grains, fruits and similar articles and the equal value or quantity is offered as donation.

The prime minister spent around 20 minutes inside the temple before returning to the nearby temple guest house on foot.

Wearing a traditional Kerala dhoti and white shawl, Modi was received at the temple gate by the authorities with a traditional poornakumbh.

Modi took a three-minute walk to the temple from the nearby Sreevatsam guest house.

Security had been tightened in and around the temple since Friday in view of his visit. Earlier, the prime minister reached here in a special naval helicopter from the Kochi naval airport at 9.50 am.

This was his first public meeting after assuming office as the prime minister for a second consecutive term.

He arrived in Kochi late Friday night and was received at the naval airport by Sathasivam, Muraleedharan and Surendran. He stayed at the government guest house in Kochi.