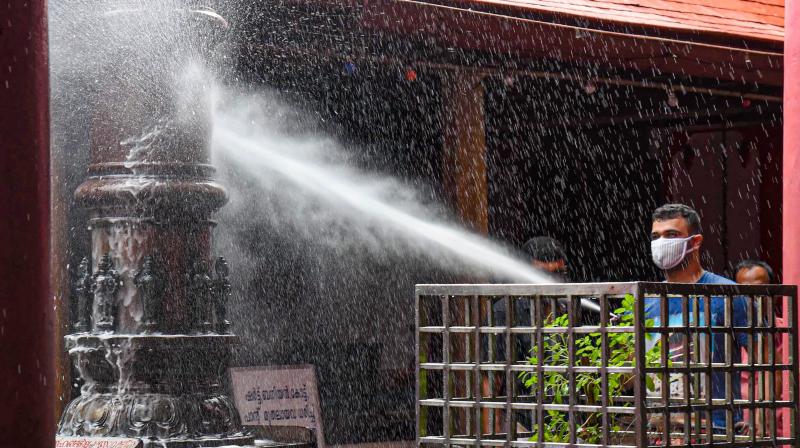 A worker sanitises a Balaji temple in Kochi ahead of its opening. PTI photo

India registered its highest single-day spike of Covid-19 cases for the fifth consecutive day on Sunday, with 9,971 new infections taking the tally to 2,46,628. With 287 fatalities reported in the last 24 hours since Saturday morning, the death toll has gone up to 6,929.

With coronavirus cases rising, AIIMS director Randeep Guleria said the cases in India could peak in two to three months. He, however, said that there was no community transmission at the national level. More than 70 per cent of Covid-19 related deaths in the country have been due to co-morbidities. The recovery rate of Covid-19 patients is 48.37 per cent.

As positive cases keep rising, the lockdown is being relaxed in phases by states and Union territories from Monday. Shopping malls outside the containment zones, restaurants and religious places are being allowed to open in several states/UTs as the government tries to boost the economy that is headed for its first full-year contraction in four decades.

Till Sunday, Maharashtra continued to top the chart in confirmed cases,
active cases, recoveries and deaths. With 2,739 new cases in the state in the last 24 hours, Maharashtra’s virus case count reached 82,968. The third phase of “Mission Begin Again”, of easing restrictions, will start on Monday, but religious places and restaurants will remain in the state.

Of the 287 deaths reported since Saturday, as many as 120 were from Maharashtra, 53 from Delhi, 29 from Gujarat, 19 from Tamil Nadu, 17 from West Bengal, 15 from Madhya Pradesh, 13 from Rajasthan, 10 from Telangana, three from Jammu and Kashmir, two each from Karnataka, Punjab and Chhattisgarh and one each from Kerala and Bihar.