It is unclear whether New Delhi specifically pressed for the inclusion of Pakistan-based terror groups in the joint statement. 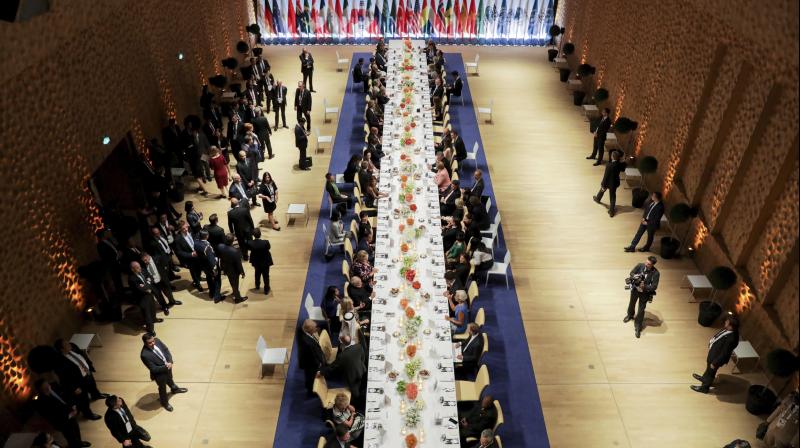 The heads of government of the G-20 states and their partners have dinner after a concert in the Elbphilharmonie concert hall in Hamburg, Germany (Photo: AP)

New Delhi: In what will be disappointing for India, the G-20 joint statement by its leaders on terrorism did not mention Pakistan-sponsored groups such as the LeT, JeM and Haqqani network though it mentioned the west Asian terror groups ISIS and Al Qaida.

Even though the joint statement “condemned all terrorist attacks worldwide” and said “terrorist safe havens (should be) eliminated in every part of the world”, it mentioned terrorists in Iraq and Syria, but failed to mention terrorists operating from Pakistani soil targeting neighbours such as India and Afghanistan. This was despite the fact that Prime Minister Narendra Modi in his address on terrorism at the G-20 had mentioned the LeT, JeM and Haqqani network in the same breath as ISIS and Al Qaida. It is unclear whether New Delhi specifically pressed for the inclusion of Pakistan-based terror groups in the joint statement but in any case it would have been virtually impossible to do so due to the presence of Islamabad’s powerful backer China in the G-20 who would have shot down any such move.

The G-20 joint statement said, “We call for strengthening measures against the financing of international terrorist organisations in particular ISIL/ISIS/Daesh, Al Qaida and their affiliates.” It added, “We will address the evolving threat of returning foreign terrorist fighters (FTFs) from conflict zones such as Iraq and Syria.”

“We, the Leaders of the G20, strongly condemn all terrorist attacks worldwide and stand united and firm in the fight against terrorism and its financing. These atrocious acts have strengthened our resolve to cooperate to enhance our security and protect our citizens. Terrorism is a global scourge that must be fought and terrorist safe havens eliminated in every part of the world. ... We will ensure that terrorists are brought to justice,” it said, adding, “There should be no “safe spaces” for terrorist financing anywhere in the world. However, inconsistent and weak implementation of the UN and FATF standards allows them to persist.”

But the statement also said, “We stress that countering terrorism requires comprehensively addressing underlying conditions that terrorists exploit. It is therefore crucial to promote political and religious tolerance, economic development and social cohesion and inclusiveness, to resolve armed conflicts, and to facilitate reintegration. We acknowledge that regional and national action plans can contribute to countering radicalisation conducive to terrorism.”