The economist also said the govt has also deflected from issues of inequalities, caste system and scheduled tribes have been kept out. 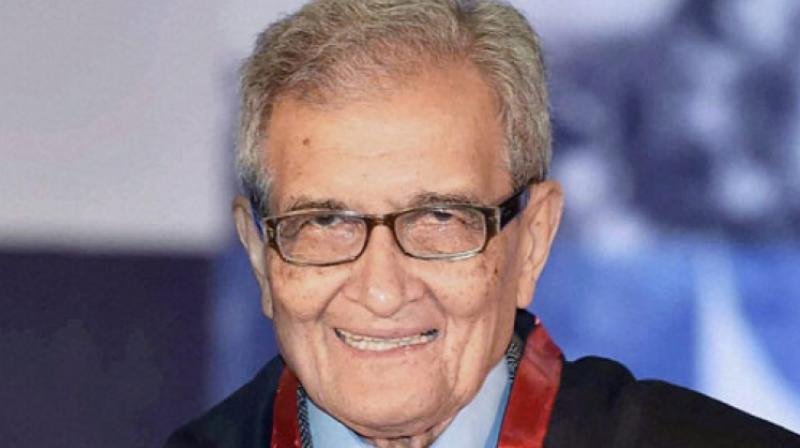 Nobel laureate Amartya Sen was speaking in Delhi at the launch of the Hindi edition of his book 'An Uncertain Glory: India and its Contradiction' that he co-authored with Jean Dreze. (Photo: File)

New Delhi: Eminent economist Amartya Sen said that despite being the fastest-growing economy the country has taken a "quantum jump in the wrong direction" since 2014.

He also said that due to moving backwards, the country is now second worst in the region.

"Things have gone pretty badly wrong... It has taken a quantum jump in the wrong direction since 2014. We are getting backwards in the fastest-growing economy," Sen said.

Twenty years ago, he added, of the six countries in this region -- India, Pakistan, Bangladesh, Sri Lanka, Nepal and Bhutan, India was the second best after Sri Lanka. "Now, it is the second worst. Pakistan has managed to shield us from being the worst."

The Nobel laureate was speaking in Delhi at the launch of 'Bharat Aur Uske Virodhabhas', the Hindi edition of his book 'An Uncertain Glory: India and its Contradiction' that he co-authored with development economist Jean Dreze.

The economist said that the government has also deflected from issues of inequalities, the caste system and the scheduled tribes have been kept out.

There were a whole group of people, those who clean lavatories or sewage with their hands, he said, whose demands and needs have been neglected.

While highlighting the recent report of a Dalit youth who was whipped for asking a salary hike from the manager of a petrol pump in Madhya Pradesh, he said they (Dalit) are going around without any kind of certainty about their next meal, healthcare or education.

Taking a dig at the BJP-led government, he added that during freedom struggle it was difficult to see that a political battle could be won by playing up the Hindu identity, but that has changed now.

"But, that has happened. Which is why, at this time, the whole issue of Opposition unity is so important," the 84-year-old economist said.

"It is not a battle of one entity against the other (or) Mr Modi against Mr Rahul Gandhi, it is an issue of what India is," Sen added

Also speaking at the event, development economist and activist Jean Dreze termed the soon-to-be launched Ayushmann Bharat health scheme a "hoax" as it was actually not big as it was being claimed to be.

It is projected as health insurance for 50 crore people, but it is virtually nothing, said Dreze, who helped draft the first version of the Mahatma Gandhi National Rural Employment Guarantee Scheme (MGNREGA).