‘There is delay due to weather. There's been no flight cancellation. However, 3 diversions have taken place,’ an airport spokesperson said. 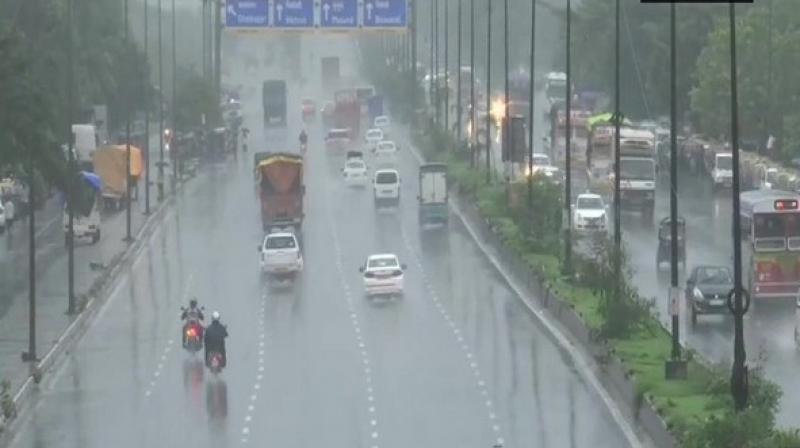 Mumbai: After a break of few days, heavy rains returned to Mumbai and its neighbouring areas on Monday morning, affecting road and rail traffic and briefly disrupting operations at the city airport.

The suburban areas received around 20 mm rainfall in just three hours starting 8.30 am, an official at the India Meteorological Department's (IMD) centre here said. This caused water-logging on rail tracks at Ghatkopar, Kanjurmarg, Sion and other stations due to which local trains on the Central Line were running slow.

Several local trains on the Central and Western lines were also cancelled due to flooding on the tracks, railway officials said. Office-goers who commute by local trains, considered the lifeline of Mumbai, were hit hard due to the heavy downpour in the morning rush hour.

Operations at the airport here were also suspended for around 20 minutes in the morning and three city-bound flights were diverted to some nearby airports, an official from the Mumbai International Airport Limited said. However, no flights were cancelled.

The services were stopped at 9.12 am and later resumed at 9.31 am, the official said. The Brihanmumbai Municipal Corporation (BMC) expressed regret over the inconvenience caused to city residents because of the heavy rainfall. "Dear Mumbaikars, the city has experienced heavy rainfall in the last couple of hours, especially in the eastern suburbs. We regret all the inconvenience that has showered along. But the intensity is on decline now & our teams will try to pump out logged water as soon as possible," the BMC said in a tweet.

Heavy cloud formation was bringing more rains to the city, the IMD official said. "The catchment areas of dams that supply drinking water to Mumbai are also receiving good precipitation. The city is expected to receive more rains today," he added.

The metropolis and its adjoining areas earlier received heavy rains for four consecutive days in June end- early July, badly affecting normal life and disrupting rail, road and air traffic at that time. After that, the city had been witnessing sporadic rains in the last few days.

An airport spokesperson said, "Due to heavy rains, the visibility is changing every minute. Since 9:15 am today, the visibility at the airport has been fluctuating. There is a delay due to the weather. There has been no flight cancellation. However, three diversions have taken place."

Earlier, the spokesperson had said, "Due to heavy rains, there was no movement of flights at the airport."

Rains have wreaked havoc in Mumbai with 27 people dying in a wall collapse incident in Malad on July 5.