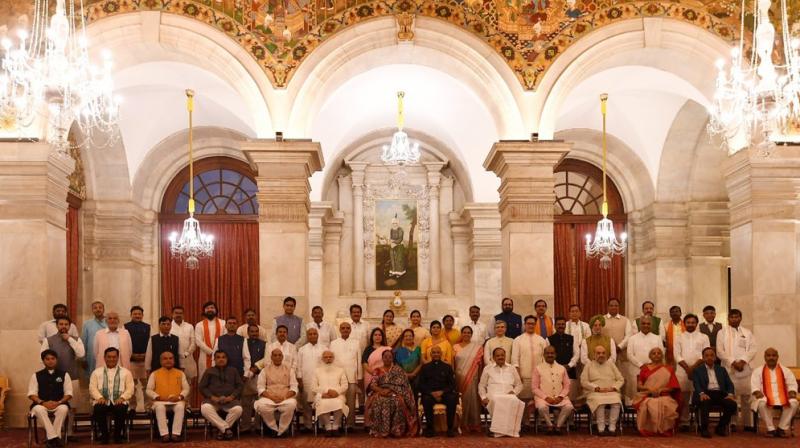 New Delhi: A day after the much awaited Cabinet reshuffle, Prime Minister Narendra Modi began work with his new ministers on Thursday, starting with the education sector.

The interaction, according to news agency ANI, is a part of the prime minister's efforts to ensure the improvement of the education institutions in the country.

On the other hand, the newly-inducted Cabinet ministers, who took oath on Wednesday, took charge of their respective Union offices today.

Mansukh Mandviya, who succeeds Dr Harsh Vardhan, took charge of the Ministry of Health and Family Welfare. Addressing reporters after taking charge, Mandviya, the new Health Minister, said, "Prime Minister Narendra Modi has given me the responsibility of the Health Ministry." "I will work in accordance with PM Modi's expectations," he added.

Union Minister Kiren Rijiju, who was the minister for Youth Affairs and Sports till now, has been promoted and given the charge of Ministry of Law and Justice. Succeeding former Union Minister Ravi Shankar Prasad as the new IT minister, Rijiju took charge of the ministry and said that functioning as the law minister was a huge responsibility.

"Fulfilling public expectations will be my priority. We will always try to be transparent," Rijiju added.

Speaking on the occasion, Meenakshi Lekhi, MoS Culture, said, "On behalf of all friends, I express my gratitude to the PM, Home Minister, party chief and the entire team that they prioritised meritocracy and hard work and gave positions to everyone. India has been brought not only on the maps but also in the ministries"

"Women have been given big responsibilities. People used to speak of women empowerment but PM Modi made it possible that the country be led by empowered women, provided recognition, and given responsibility. This is praiseworthy," Lekhi added.

Meanwhile, former Minister of State for Finance and Corporate Affairs Anurag Thakur also took charge of the Ministry of Youth Affairs and Sports, succeeding Kiren Rijiju. Thakur paid a visit to Finance Minister Nirmala Sitharaman and expressed his gratitude towards her.

In a tweet, Thakur thanked Sitharaman for her support and guidance, "I called on FM Smt @nsitharaman  ji to express my sincere thanks, for her support & guidance in @FinMinIndia & Min of Corporate Affairs. It has been an insightful journey working on the Union Budgets, the AatmaNirbhar Packages along w/ other mega policy reforms."

"I take this opportunity to also thank all the Officers and Officials along with the Media fraternity who have worked/interacted with me during my tenure in the Ministry. I look forward to keeping in-touch and your continuous feedback !" he added in another tweet.

BJP leader Jyotiraditya Scindia, who switched from Congress to BJP last year, will assume office as the new Civil Aviation Minister. Before assuming office, Scindia, in an interaction with the reporters, said, "I hope to meet all expectations. I will work hard, just like I worked for the people in last 15-20 years."

The Rajya Sabha MP has replaced Hardeep Singh Puri, who has been given the charge of the Ministry of Petroleum and Natural Gas, along with Housing and Urban Affairs Ministry.

"I thank Prime Minister Narendra Modi, our party chief JP Nadda and Home Minister Amit Shah. I will carry out the responsibility given by them with hard work and determination, the effort will be to meet their expectations," Scindia added.

Keeping in mind caste equations and regional aspirations ahead of crucial Assembly polls, especially in Uttar Pradesh, and the 2024 Lok Sabha elections, the much-awaited reshuffle and expansion of Prime Minister Narendra Modi's Council of Ministers finally took place on Wednesday with the induction of many new, young leaders, some expected promotions and at least three shocking departures.