DMK said AIADMK's refusal to permit the burial was plain and simple 'political vendetta' and 'reeks of pettiness'. 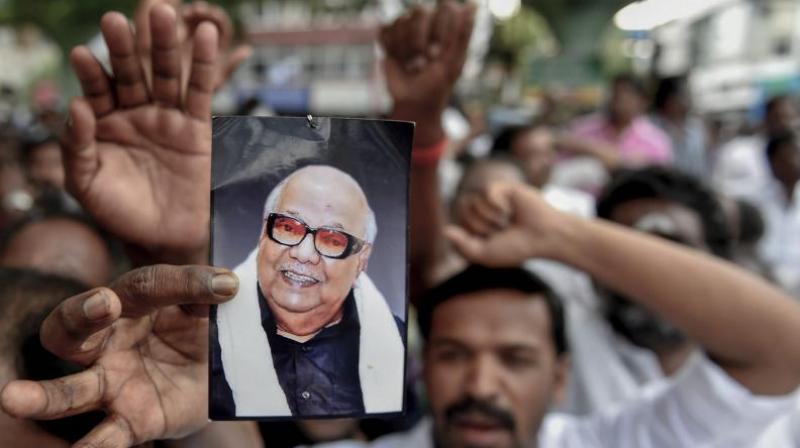 Chennai: Palanisamy government in Tamil Nadu has faced criticism for rejecting the DMK's request for M Karunanidhi's burial next to the grave of his political mentor CN Annadurai along Marina beach.

The sharpest attack came from the DMK, the party that Karunanidhi led for nearly five decades, which approached the Madras High Court against the AIADMK's denial of the burial site to the late DMK president at Marina beach. The DMK said the AIADMK's refusal to permit the burial was plain and simple "political vendetta" and "reeks of pettiness".

"We are not asking for a memorial at this stage... but only that he should be buried next to his mentor, Anna," DMK spokesperson and lawyer A Saravanan told reporters after the Madras High Court's unprecedented hearing past midnight. The court will resume hearing at 8 am on Wednesday.

DMK spokesperson and lawyer A Saravanan said Anna Square, the memorial built in memory of former chief minister, was not covered under the coastal regulation zone that bars construction within 500 metres from the waterfront.

During the midnight court hearing and later, Saravanan spoke about how the AIADMK had no qualms when it buried the party matriarch and former chief minister J Jayalalithaa at the MG Ramachandran memorial, her mentor.

"We also informed the court how the government is proposing to construct a 3,400-3,500 square feet building for Ms Jayalalithaa's memorial but is refusing to give 6 feet of land for Karunanidhi," the DMK leader said, a reference to a Rs 50 crore memorial that the AIADMK government is planning to build for its leader. The memorial is modelled on a phoenix to symbolise Jayalalithaa's grit and political comebacks.

"They (AIADMK government) want to test emotional patience of the DMK cadres," he said.

Karunanidhi's son and working president of DMK MK Stalin has asked the party cadres to maintain peace and hand over miscreants, who may try to tarnish the DMK's image, to the police. "Prove DMK follows military discipline," he said in a public appeal for calm.