Karunanidhi was buried with full military honours with soldiers giving him a gun salute and buglars sounding the last post. 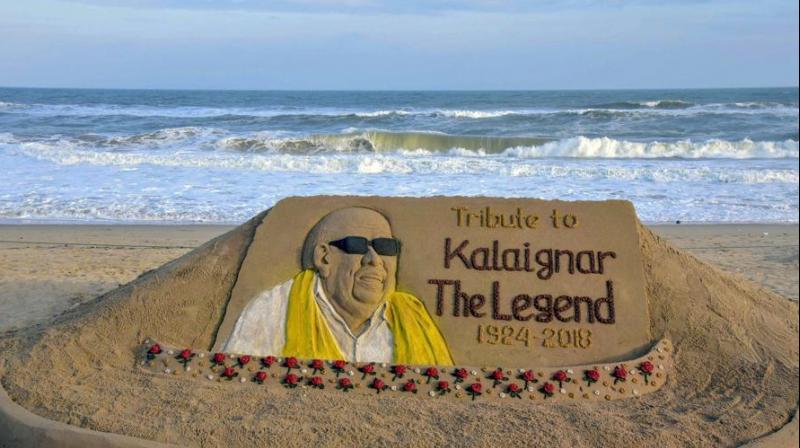 The 94-year-old leader had breathed his last at a hospital here after fighting for life for 11 days.  (Photo: AFP)

Chennai: Muthuvel Karunanidhi, a doyen of Dravidian politics, was on Wednesday laid to rest on the Marina beachfront as a sea of humanity bid him a tearful farewell after an unsavoury courtroom battle his party won to secure for him the final resting place at the Chennai landmark.

The country's high and mighty descended on the city to pay their last respects to the "Thalaivar" (the leader), school dropout, who left an indelible imprint on the state's public life over decades through his literary, cinematic and political achievements.

The 94-year-old leader had breathed his last at a hospital here after fighting for life for 11 days. 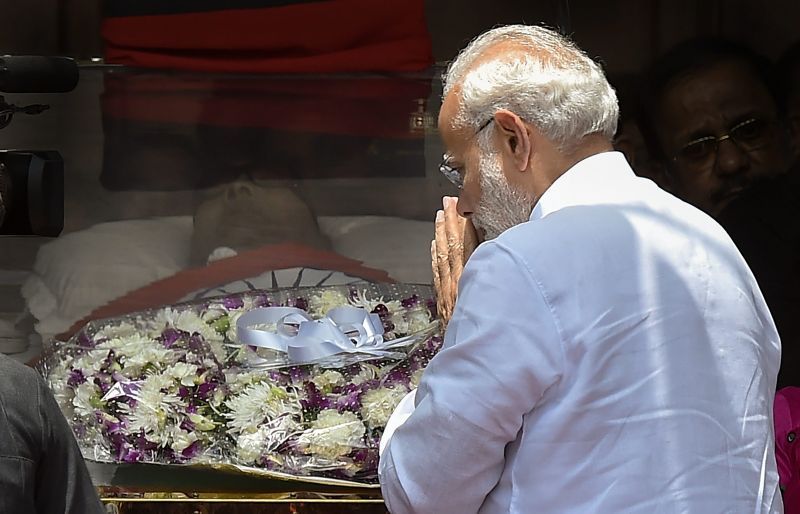 Karunanidhi was buried with full military honours with soldiers giving him a gun salute and buglars sounding the last post.

Other family members including the leader's wife Rajathi Ammal, other sons and daughters showered flower petals at his feet.

In poignant scenes, Stalin was seen crying inconsolably after touching his father's feet before the casket containing Karunanidhi's body was lowered into the grave.

Karunanidhi being a self-proclaimed atheist and rationalist, no Hindu rituals were performed.

Earlier in the day, as thousands of grieving DMK supporters, leaders and celebrities filed past the golden casket containing the mortal remains of the leader draped in the national tricolour at the stately Rajaji Hall, a courtroom battle raged over where he should be buried. 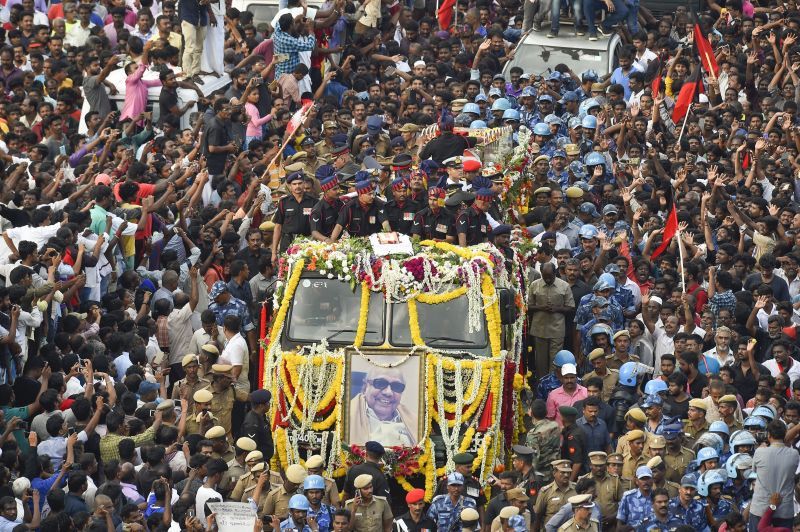 People gather to pay their last respects to DMK chief M Karunanidhi as his cortege passes through the streets of Chennai. (Photo: PTI)

The state's AIADMK government had on Tuesday rejected the DMK's demand for space at the Marina for Karunanidhi's burial and construction of a memorial to him, citing pending litigations over ecological concerns.

The DMK had swiftly moved the Madras High Court which partially heard its petition around midnight and resumed the hearing at 8 this morning.

The court ruled in DMK's favour and the Thalaivar got his final resting place next to his mentor and former chief minister C N Annadurai.

"There is no legal impediment for not allotting the place... Provide a place for a decent burial forthwith in terms of the rough sketch given by the petitioner," the division bench of the court comprising Acting Chief Justice H G Ramesh and S S Sundar ruled.

"There is no legal impediment for not allotting the place. Already alloted place in the marina for all Dravidian leaders. There is no need to take different stand in the present case," the bench said.

The court's order was greeted with loud chants of "Kalaignar Pugazh Onguga (long live Kalaignar's fame)" by thousands of DMK cadre at the Rajaji Hall some 8 km away.

A glum-faced M K Stalin, Karunanidhi's son and DMK working president, who stood pensively beside the casket, sobbed uncontrollably, before regaining composure and wiping off tears of joy amid the pervasive gloom. 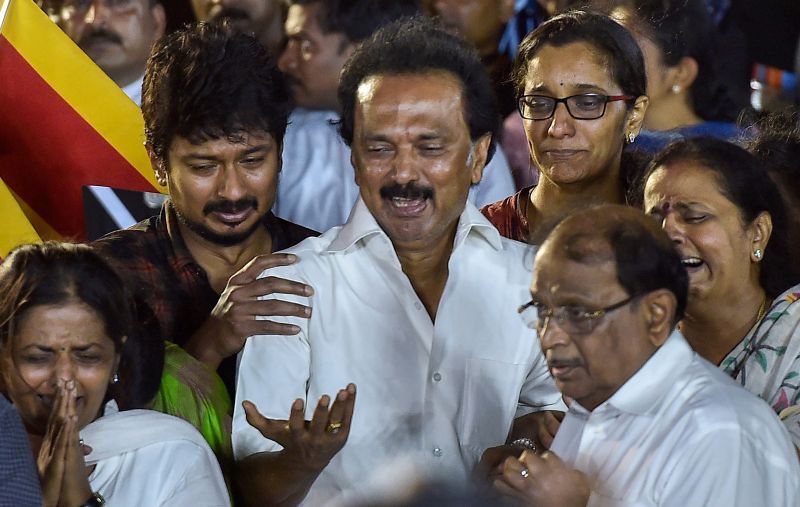 Shouts of "vendum vendum, Marina vendum (we want Marina)" had greeted Chief Minister K Palaniswamy earlier in the day when he arrived at the Rajaji Hall to pay his tributes. 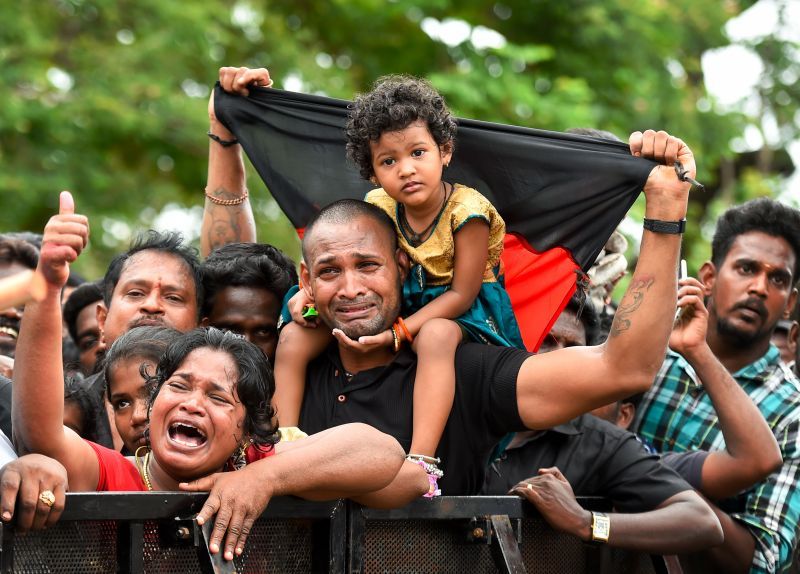 Supporters mourn as they arrive to pay their last respects to DMK chief M Karunanidhi at Rajaji Hall in Chennai . (Photo: PTI)

The court's order dealt a big blow to the AIADMK, which spared no effort to deny Karunanidhi, who headed its rival outfit DMK for half-a-century, a feat unparalleled in the country's history, the final resting place at the Marina.

AIADMK founder and former chief minister M G Ramachandran and his protegee J Jayalalithaa, who were buried on the beach and have memorials there, had died in office, and the government cited this as a ground for not bestowing the same privilege to Karunanidhi as he was not a serving chief minister.

There was a massive surge of people at the Rajaji Hall where lakhs had gathered to pay homage to Karunanidhi, a five-time chief minister and political warhorse who won 13 assembly elections on the trot.

He clasped Stalin's hand and the two talked quietly for some time.

The crowd swelled by the minute, people pressing against each other in a massive surge, pushing, shoving, stumbling on each other and clashing with police whose personnel wielded batons to control them.

Some fainted, scores were injured, prompting Stalin to make an appeal to maintain calm.

Identical scenes were witnessed at the Marina. Hundreds of thousands of people lined the streets as the flower-bedecked gun-carriage inched its way there from Rajaji Hall. 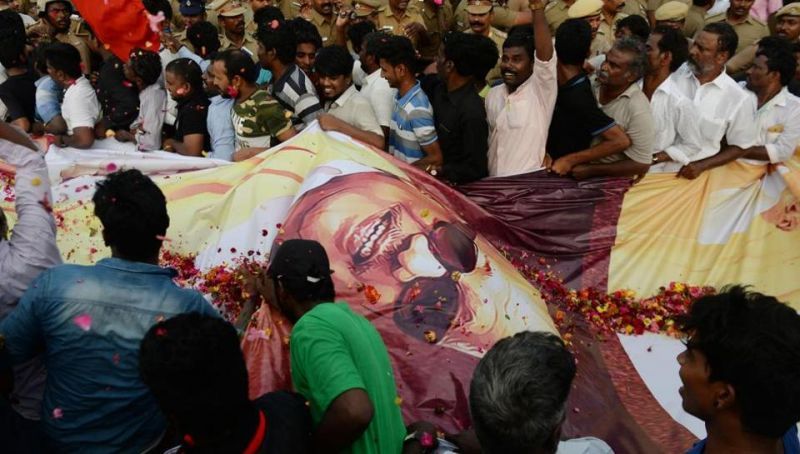 Supporters carry a large banner of the DMK patriarch during the funeral procession in Chennai. (Photo: AFP)

Many crashed their way through the barricades. Others perched precariously atop trees and lamp posts for the one last glimpse of their beloved leader.

Stalin and other male members of the Karunanidhi family walked quietly behind the gun carriage as police personnel threw a security cordon around them.

The DMK's red-and-black flags fluttered across the landscape.

As the golden sun began to dip slowly into the sea, it shone light on the inscription on the casket in Tamil that read: "The one who slogged all his life without rest, rests here", signifying the end of an era in Tamil Nadu politics.