India   All India  08 Aug 2018  Karunanidhi’s burial at Marina Beach: Hearing to resume at 8 am today
India, All India

Karunanidhi’s burial at Marina Beach: Hearing to resume at 8 am today

The court will now resume hearing at 8 am as Tamil nadu government has reportedly sought more time to file a reply. 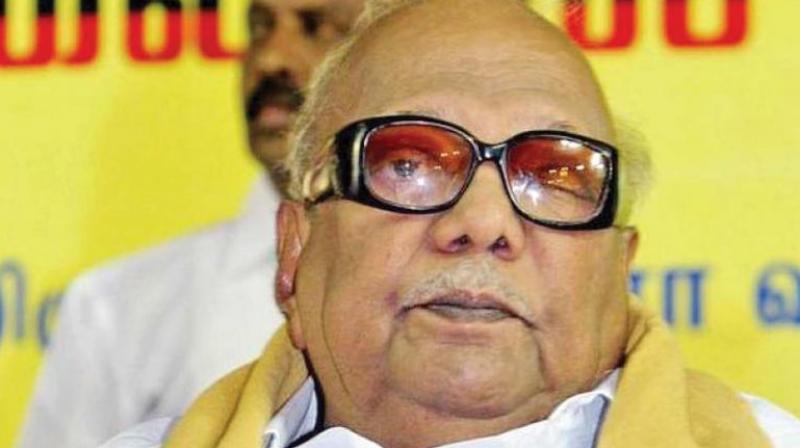 Chennai: Madras High Court has adjourned the hearing of DMK's plea seeking burial of late party supremo M Karunanidhi's mortal remains at Chennai's Marina Beach. The court will now resume hearing at 8 am as Tamil nadu government has reportedly sought more time to file a reply in the case.

The judges heard the arguments by counsel for the DMK and the state government before adjourning the matter around 1.15 a.m for resumed hearing at 8 in the morning. The DMK counsel wanted to know the legal ground on
which its demand was rejected following which the advocates for the government pleaded for time till morning to file a counter affidavit which the court allowed.

DMK chief M Karunanidhi, a colossus in Tamil Nadu politics, poet, columnist and script writer, who left an indelible imprint on the state's public life for over five decades, died today, setting the stage for a late night courtroom drama over where he shall be buried. The 94-year-old leader breathed his last at the Kauvery Hospital in downtown Chennai at 6.10 p.m after waging a grim battle for life for 11 days, the hospital said. He had not made any public appearance for about two years due to failing health.

Within minutes of Karunanidhi's death, a huge row erupted after the state's AIADMK government rejected the
demand of the DMK, its long-standing political rival in state politics, for land on the famed sands of the Marina beach
where he could be buried. Wasting no time, DMK's counsel P Wilson and A Sarvanan rushed to the residence of H G Ramesh, the Acting Chief Justice of the Madras High Court, with a plea to direct the state government to revoke its decision denying permission for Karunanidhi's burial and erection of a memorial to him on the beach. Their plea was granted and Justice Ramesh and his fellow judge S S Sundar began hearing the petition minutes before midnight.

In a twist to the late night proceedings, unprecedented in Tamil Nadu's legal history, two of the petitioners who had moved the court against late chief minister J Jayalalithaa's burial at the Marina and construction of a memorial there, withdrew their applications. One of them, advocate S Duraisamy, said the claim of the government that the memorial to Karunanidhi's mentor and former chief minister C N Annadurai facing the Marina beach, where the DMK sought land for its leader's burial, was in an ecologically sensitive zone, was "misleading". He told reporters outside the Acting Chief Justice's residence that it was on the banks of the Cooum river close to the beach but not in the eco-sensitive zone like the memorials of Jayalalithaa and former AIADMK chief minister the late M G Ramachandran.

Similarly, K Balu of PMK also withdrew his petition seeking the court's direction against use of the Marina as a
burial ground. Earlier in the day, another PIL filed in the Madras High Court seeking to restrain the Corporation of Greater Chennai from permitting any burial of bodies on the Marina beach was dismissed as withdrawn.

Hours before the unsavoury courtroom saga unfolded, Karunanidhi was declared dead by the hospital where he was
undergoing treatment since his admission on July 28 when his blood pressure had dipped. "With deep anguish we announce the demise of our beloved Kalaignar M Karunanidhi on 07.08.2018 at 6.10 pm. Despite the best possible efforts by our team of doctors and nurses to resuscitate him, he failed to respond.

"We profoundly mourn the loss of one of the tallest leaders of India and we share the grief of family members and
fellow Tamilians worldwide," a press release by Dr Aravindan Selvaraj, Executive Director of Kauvery Hospital, said.
President Ramnath Kovind and Prime Minister Narendra Modi mourned Karunanidhi's death. "Extremely sad to learn of the passing of Thiru M Karunanidhi. A doyen of our public life, as a contributor to the development of Tamil Nadu and of India he has few peers. Our country is poorer today. My condolences to his family and millions of well-wishers," Kovind tweeted.

Modi said Karunanidhi stood for regional aspirations as well as national progress. "Deeply saddened by the passing away of Kalaignar Karunanidhi. He was one of the senior most leaders of India. We have lost a deep-rooted mass leader, prolific thinker, accomplished writer and a stalwart whose life was devoted to the welfare of the poor and the marginalised," Modi said in a series of tweets.

Congress president Rahul Gandhi also took to Twitter to condole Karunanidhi's death. "Loved by the Tamilian people, Kalaignar strode the stage of Tamil politics, like a colossus, for over 6 decades. In his passing, India has lost a great son. My condolences to his family as also to the millions of Indians who grieve for their beloved leader tonight," he said on Twitter.

Both Modi and Gandhi, besides a host of other leaders are expected to arrive here tomorrow to pay their last respects to the departed doyen of Tamil Nadu politics. Soon after Karunanidhi's death, his son and DMK working president M K Stalin despatched his emissary and the party's deputy leader in the state assembly Duraimurugan to Chief Minister K Palaniswamy requesting him to allot land in the mausoleum complex of Annadurai.

Soon afterwards, the government issued a statement saying it was "unable to allot space at Marina beach owing to
several pending cases in the Madras High Court and legal complications." Hence, the government is prepared to allot a two-acre site on Sardar Patel Road near the memorials to Rajaji and Kamaraj, it said.

Some reports said the government was reluctant about allotting space for Karunanidhi's burial at the Marina as he was not a sitting chief minister. Former chief minister M G Ramachandran and his protegee J Jayalalitha were buried at the Marina beach and memorials to them were erected there. Both were bitter foes of Karunanidhi in politics.