India   All India  08 Aug 2018  Stalin breaks down after HC ruling on Karunanidhi's burial at Marina
India, All India

Stalin breaks down after HC ruling on Karunanidhi's burial at Marina

Madras High Court ruled that M Karunanidhi will be buried next to his mentor CN Annadurai at Marina Beach in Chennai. 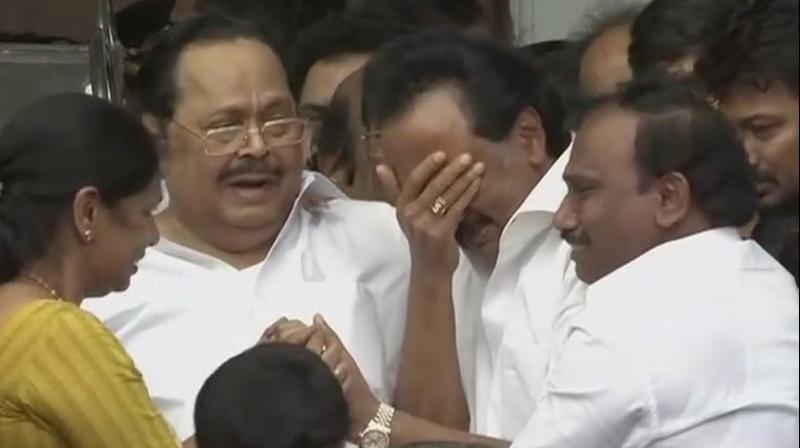 Chennai: Karunanidhi's son and DMK working president M K Stalin broke down soon after the Madras High Court ruled that DMK president and former chief minister M Karunanidhi will be buried next to his mentor C N Annadurai at Marina Beach in Chennai.

Ever since the health of Karunanidhi deteriorated, M K Stalin was one of the strongest among the family members who kept assuring DMK cadres and Karunanidhi's supporters not to panic.

Scores of people are visiting the iconic Rajaji Hall in Chennai to catch last glimpse of the DMK patriarch who died at the age of 94 on Tuesday evening.

M K Stalin, who wrote an emotional poem in his father's memory and other family members, including M K Selvam and daughter M Kanimozhi, have been standing beside Karunanidhi's body.

Also Read: Shall I call you Appa once at least now? son Stalin pens poem for Karunanidhi

Draped in the tricolor, Karunanidhi's mortal remains were brought to the Rajaji Hall on Wednesday morning after it was taken to his homes at Gopalapuram and at CIT Colony for relatives and leaders to pay their last respects.