Sushma Swaraj: A ‘people’s minister’ with a healing touch

Swaraj was a mother to those who were rescued from desperate or helpless situations abroad. 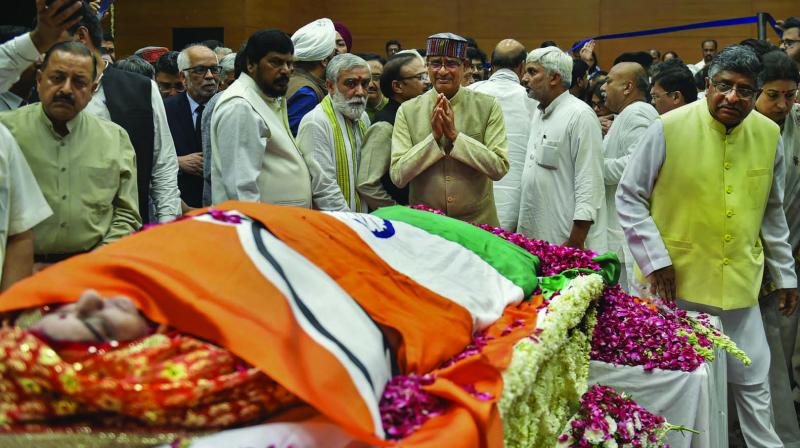 New Delhi: Former external affairs minister (EAM) Sushma Swaraj will be remembered forever for her healing touch and constant efforts during her tenure as the EAM from May 2014, to May, 2019, to help Indians in distress abroad. She virtually brought the ministry of external affairs to the doorstep of every Indian — whether at home or abroad-by her personal monitoring of Twitter through which she directed swift remedial action. Ms Swaraj oversaw large rescue missions abroad in West Asia and North Africa where thousands of Indians in war-torn zones were brought back home in special flights. She also successfully managed to ensure the return of Indians kidnapped, imprisoned or stranded abroad. And if it was even a matter of an Indian having lost his or her passport abroad, she ensured that Indian embassies abroad were opened even on weekends to process emergency travel papers. For these measures, she earned the praise of millions who saw it as evidence of a “New India” that was willing to use all its might for the welfare of its citizens. “The life of every Indian is most precious for us,” she had famously declared.

Ms Swaraj was a mother to those who were rescued from desperate or helpless situations abroad. This included Indian woman Uzma Ahmed who was trapped in Buner in Pakistan’s tribal Khyber Pakhtunkhwa province after being forced to marry a Pakistani man there. Ms Ahmed was rescued in 2017. Another of those who returned due to Ms Swaraj’s persistent efforts in 2018 was Indian engineer Hamid Nehal Ansari who was jailed in Pakistan after allegedly illegally entering the country from Afghanistan reportedly to meet a girl he had befriended online. Geeta---the hearing and speech-impaired Indian girl who returned home in 2015 after being stranded in Pakistan for over a decade---was another person who managed to return due to Ms Swaraj’s efforts. Others included Indian Christian priest from Kerala Father Tom Uzhunnalil who was rescued from his ISIS captors in Yemen in September, 2017, Indian Christian Priest from Tamil Nadu Fr Alex Prem Kumar was rescued from his Taliban captors in Afghanistan in 2015 and Indian woman Judith D’Souza who was released from her Afghanistan captors in 2016. All this was possible due to the tireless efforts of Ms Swaraj.

She was also compassionate and kind to people in Pakistan who needed visas to travel to India in cases of medical emergencies that included infants and the elderly. At times, she personally ordered grant of medical visas after being convinced of the genuineness of the case.