The voices of dissent had emerged after the Congress vehemently opposed the abrogation of Article 370 on the floor of Parliament. 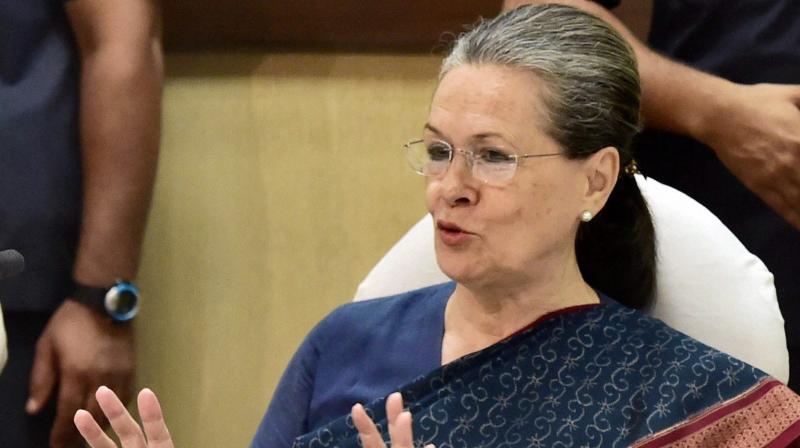 Congress Parliamentary Party leader Sonia Gandhi is understood to have said that if the party supported the BJP now, will it support them when they bring in the Uniform Civil Code. (Photo: PTI)

New Delhi: In an effort to stymie differences within the party over the abrogation of Article 370, the Congress has called a meeting of all its general secretaries, state in-charges, the chairpersons of AICC departments and MPs on Friday to explain the party’s stand on the issue and the subsequent Congress Working Committee resolution on it.

This decision follows acrimonious scenes at Tuesday’s CWC meeting where Congress president Rahul Gandhi asked Jyotiraditya Scindia to give an explanation for his tweet supporting the abrogation of Article 370. To this, Mr Scindia replied that there was no point in opposing every bill of the government and that the Congress must support Kashmir’s intergation with India, sources told this newspaper.

“Though I am in a minority, I stand firmly by my tweet,” sources quoted Mr Scindia as saying.

On Tuesday, Mr Scindia had tweeted: “I support the move on #JammuAndKashmir & #Ladakh and its full integration into Union of India. Would have been better if constitutional process had been followed. No questions could have been raised then. Nevertheless, this is in our country’s interest and I support this.”

At the CWC meeting on Wednesday that lasted nearly four hours, Mr Scindia was backed by other leaders like R.P.N. Singh and Deepinder Hooda. At this Mr Gandhi is learnt to have asked the leaders that if the Congress supported the BJP on this bill, who would end up getting the Hindu votes?

Leader of Opposition in Rajya Sabha Ghulam Nabi Azad said it was an assurance by then PM Jawaharlal Nehru to stand with Kashmiris. “Now we cannot abandon them. Kashmiris were the ones who stood with India.” he is learnt to have said emotionally.

Congress Parliamentary Party leader Sonia Gandhi is understood to have said that if the party supported the BJP now, will it support them when they bring in the Uniform Civil Code. She was supported by Priyanka Gandhi Vadra on this.

Former J&K parliamentarian Tariq Hameed Karra is learnt to have got emotional. At this point, the sources said Mr Scindia and the others softened a little and said they did not think of Kashmiri sentiments while taking a stand on the issue, after which certain changes were made in the CWC resolution that was released thereafter.

The voices of dissent had emerged after the Congress vehemently opposed the abrogation of Article 370 on the floor of Parliament. Besides Mr Scindia, senior leader Janardan Dwiwedi had also questioned the party’s stand.

The resolution adopted by the CWC on Wednesday has deplored the “unilateral”, “brazen” and “undemocratic” way in which Article 370 was revoked. It said this provision, that accorded special powers to Jammu and Kashmir, should have been “honoured” till it was amended constitutionally after due consultations.