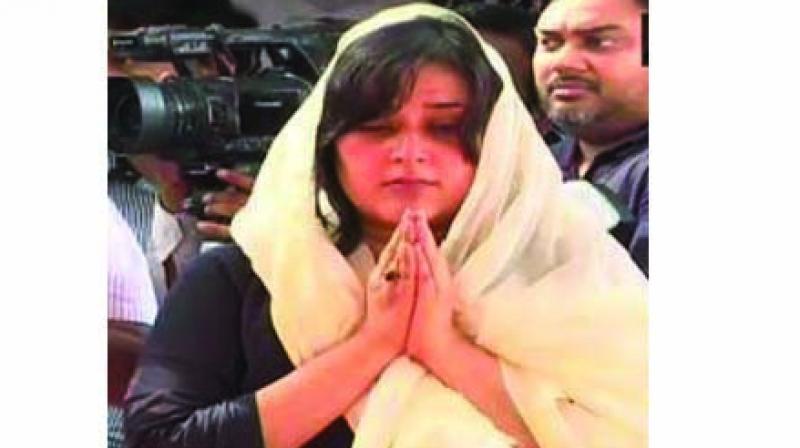 New Delhi: Tears rolled down her face as Bansuri performed the last rites of her mother Sushma Swaraj, surrounded by a sea of mourners on Wednesday.

Swaraj’s husband Kaushal Swaraj and daughter saluted the mortal remains, wrapped in a tricolour, as they were kept on a hearse decorated with flowers at the BJP office on DDU Marg, before its final journey to Lodhi Road crematorium.

The body of the former minister was kept at the BJP headquarters for a few hours for people to pay their respects.

At the crematorium, the body was kept on a platform where Prime Minister Narendra Modi, other senior leaders and people from different walks of life converged to pay homage to her.

As part of the rituals, a distraught Bansuri, who is an advocate by profession, carried a ‘matka’ filed with water and circumambulated the platform before breaking the earthen pitcher by smashing it on the ground.

Kaushal accompanied his sobbing daughter as she moved around the platform while performing the ritual.

The Prime Minister was also seen comforting Kaushal and Bansuri.

Both Bansuri, an Oxford University graduate, and her father, practice at the Supreme Court.

A sea of mourners had gathered at the Lodhi Road crematorium here where she was cremated with full state honours.

Swaraj, one of India’s most high-profile woman politicians, who brought a rare empathy and a human approach to India’s diplomacy, died at AIIMS here late Tuesday night, plunging the nation in a state of grief.

The mortal remains of the former external affairs minister were cremated in an electric crematorium as senior leaders, besides family, friends and admirers bid a tearful adieu to the political stalwart.

At the BJP headquarters, some cried inconsolably and others fought back tears as senior party leaders, including BJP president Amit Shah and working president J.P. Nadda, covered Swaraj’s body with the national flag and paid their tributes.