Mukherjee was greeted on receiving the accolade by PM Modi, Vice President Naidu and slew of other leaders who were present at ceremony. 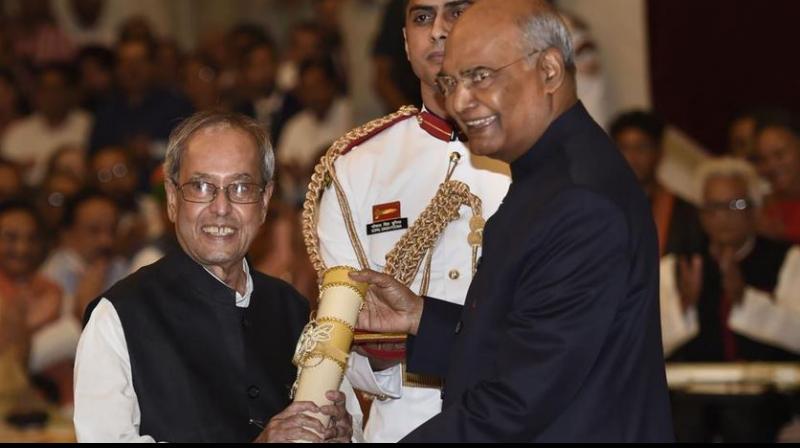 Mukherjee was greeted on receiving the accolade by Prime Minister Narendra Modi, Vice President M Venkaiah Naidu and a slew of other leaders who were present at the ceremony.

Born on December 11, 1935, in a Bengali family in Mirati, a village in Birbhum district in West Bengal, Mukherjee completed his Masters in Political Science and History and LLB degree from University of Calcutta.

Mukherjee's life-long political career spanned about five decades, during which he held various key posts in the Congress as well as in the governments led by Indira Gandhi, Rajiv Gandhi, P V Narasimha Rao and Manmohan Singh.

As Finance Minister, Mukherjee signed the letter appointing Manmohan Singh as Governor of the Reserve Bank of India (RBI).

Hazarika, an acclaimed poet and filmmaker, was born on September 8, 1926, and passed away on November 5, 2011. Hazarika was most popular in West Bengal and Bangladesh and was responsible for introducing the culture and folk music of Assam and Northeast India to Hindi cinema.

Nanaji Deshmukh was born on October 11 in 1916 in a small town of Hingoli in Maharashtra, Deshmukh represented Uttar Pradesh's Balrampur constituency in the Lok Sabha from 1977 to 1979.

From 1999 to 2005, he also served as a nominated member of the Rajya Sabha. Deshmukh was honoured with the Padma Vibhushan earlier.

One of the founding members of Bharatiya Jan Sangh, Deshmukh established a chain of RSS-inspired schools throughout India.He was associated with the RSS till his death at the age of 94 in 2010.

The veteran also played a key role in the Jai Prakash (JP) movement against Emergency in 1974 and was instrumental in the formation of the Janata Party government in 1977.