Swaraj later announced a reward of Rs 1 lakh to those who could provide clue leading to identification of Geeta’s parents. 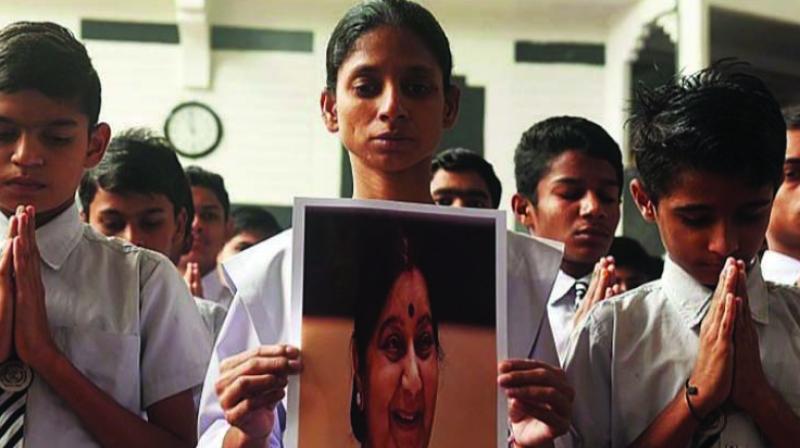 Bhopal: Former external affairs minister Sushma Swaraj’s demise has turned Geeta, the deaf and dumb girl who strayed into Pakistan when she was barely eight-years-old and brought to India at the initiative of the flamboyant leader in 2015, an “orphan”.

Geeta, rehabilitated in a shelter home for deaf and dumb in Indore in Madhya Pradesh after her return to India on October 26, 2015, fell into stunned silence when she learnt about sad demise of Ms Swaraj on Wednesday morning.

“We thought it prudent not to break the sad news to her in the middle of night on Tuesday fearing that she might not take it in her stride. She was crestfallen when she learnt about it in the morning,” the shelter home head Monica Punjabi told this newspaper.

She was struggling hard to control her emotions as she remained expressionless with tears rolling down her cheeks, Ms Monica said.

“I lost my mother and became orphan for the second time in my life. Whom I shall turn to now?” sign language expert of the shelter home Sandeep Pandit, who translated Geeta, quoted her as saying.

Swaraj had played “supermom” to many and Geeta was one of them.

Ever since, Geeta was brought back to India, Ms Swaraj almost made it a mission in her life to reunite her with her “lost” parents and ensure she settled in life.

Geeta was spotted in Samjhauta Express at Lahore railway station in Pakistan by Pakistan rangers who had handed her over to the Edhi Foundation, local NGO, to give her shelter. She had given hints that she hailed from India, leading Ms Swaraj to take the initiative to bring her back to the country.

Swaraj later announced a reward of Rs 1 lakh to those who could provide clue leading to identification of Geeta’s parents.

Swaraj had personally supervised the process of scrutinising the couples who claimed to be Geeta’s parents. But, none of them were found to be Geeta’s biological parents.