India   All India  08 Aug 2020  Alert sounded along Arunachal's Siang river after formation of artificial lake in Tibet
India, All India

Arunachal Pradesh Disaster Management director Atul Tayeng in a letter to deputy commissioners on the issue. 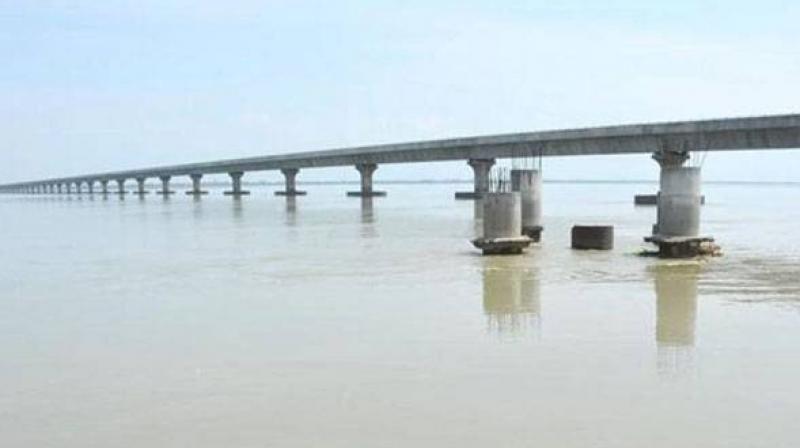 Itanagar: An alert has been sounded all along the Siang river basin in Arunachal Pradesh after the Union Home Ministry in a report informed about the formation of an artificial lake on Yigong Tso river in Tibet, an official said.

Arunachal Pradesh Disaster Management director Atul Tayeng in a letter to deputy commissioners of Siang, Upper Siang, East Siang and West Siang recently asked them to remain alert and be prepared in case of an unlikely scenario of flood situation due to breach of the lake.

Tayeng issued the letter after the Union Home Ministry in a report informed that the lake formed is more than 200 kilometres away from the Indian border and said that in case of a breach, the computed peak flood of 823 m3/sec is very less compared to the flood discharge in the Brahmaputra when it enters India.

"However, it is to be noted that the conclusion was derived based on the hydrological simulation study by assuming the depth and using empirical formulas and hence cannot be used for real time operation and flood management," the report added.

Tayeng in his letter had stated, "Considering statistics from previous years the threat of flood is minimal. However, as there is a possibility of increasing lake water, you are requested to be on alert and be prepared in case of an unlikely flood scenario due to the breach of the lake".

Meanwhile, BJP Lok Sabha MP from Arunachal East Parliamentary Constituency Tapir Gao, said that he has spoken to all deputy commissioners concerned and asked them not to allow the people venture near the most unpredictable river basin until clearance is received from the Union Home Ministry.

Siang Deputy Commissioner Rajiv Takuk, when contacted, said that gaon burahs (village headman) have been sent to low lying areas to ask local inhabitants not to panic but to remain alert. Gao said that a meeting was held on Thursday to discuss the issue and possible remedial measures. "Sudden flow of higher volume of water would be risky now as water level is already high now due to rainy season," he said.

East Siang Deputy Commissioner Dr Kinny Singh also said that alert has been sounded up to the grassroots level for one and all to remain cautious though the possibility of threat of flood is minimal." But, it is better to remain vigilant as mighty Siang River is unpredictable, she added.

Meanwhile, Congress Pasighat West MLA Niong Ering in a letter to Prime Minister Narendra Modi on Thursday urged him to ask his Chinese counterpart to share the latest information on the status of Siang river, known as Brahmaputra in Assam and Yarlung Tsangpo in Tibet, which was not shared in the past two years.

Ering said that the Siang river has once again become a threat for the people of Arunachal Pradesh and Assam after a landslide in the Nien-Ching-Tang-Ku-La Shan East mountain range.

The legislator said the landslide which occurred due to earthquakes in the area has created a natural dam in Yigong Tsangpo, one of the major tributaries of Yarlung Tsangpo or Siang River in southern Tibet.

Ering, a former Lok Sabha MP said automatic weather stations must be established at all border points from where the rivers flow into the country.

The Central Water Commission needs to collect and disseminate the flow rate data in advance, he said.