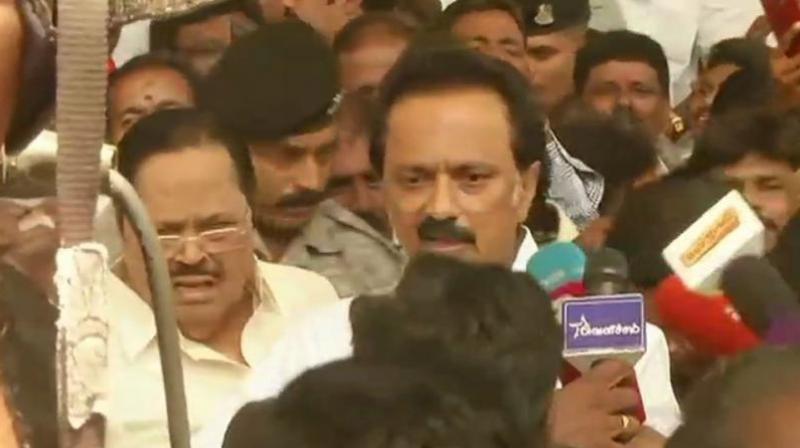 The meeting, the first one to be headed by MK Stalin following his August 28 elevation as party chief, blamed the Centre on issues ranging from demonetisation, Rafale deal, NEET and the prevailing economic situation. (Photo: ANI | Twitter)

Chennai: The DMK launched an attack on the BJP-led Central government on Saturday, accusing it of running an “electoral dictatorship” and vowed to “defeat” the party’s “saffronisation dreams”.

A meeting of the party’s District Secretaries, MPs and MLAs held under President MK Stalin and members said the party was ready to “pay any price” to uphold Constitutional values.

The meeting, the first one to be headed by MK Stalin following his August 28 elevation as party chief, blamed the Centre on issues ranging from demonetisation, Rafale deal, NEET and the prevailing economic situation.

“The BJP government is ignoring the interests of Tamil Nadu, affecting plurality and promoting communalism, even as human rights activists and those opposed to the BJP are being painted as anti-nationals,” a resolution adopted in the meeting said.

The resolution titled “Will reject BJP’s saffronisation dreams” alleged that media critical of the BJP government was being “intimidated” while Dalits and minorities were being targeted in many places.

An “undeclared emergency” was, therefore, in place, it said.

“The BJP has installed an electoral dictatorship and has been running an anti-people government for the last four years,” the party alleged.

The DMK also alleged that the BJP was controlling institutions like the Election Commission, IT Department and CBI, adding “there is a crisis” even in the judiciary, referring to the outburst by four senior Supreme Court judges earlier this year.

While demonetisation was announced in “haste,” the GST which was rolled out last year was a “goof-up”, it said, and referred to the falling value of the Indian rupee against the US dollar, leading to rise in fuel prices and increasing current account deficit.These had severely hurt the economy, the party added.

Further, DMK will never allow BJP’s “communal” designs to take shape in the state and will “pay any price to uphold the Preamble of the Constitution,” it said.

Training its guns on the state government led by arch-rival AIADMK, the DMK charged that the former had become the “epitome of corruption” and vowed to unseat it.

It announced state-wide protests against the government on September 18.

Further, it called for the dismissal of state Health Minister C Vijayabaskar and removal of police chief TK Rajendran, on whose premises the CBI had conducted searches on Thursday in connection with the Gutka scam, relating to alleged payoffs by a manufacturer.

The meeting also demanded an immediate release of the seven convicts in the Rajiv Gandhi assassination case, following a direction from the Supreme Court that the state Governor can consider the mercy plea of one of them, AG Perarivalan.

The Tamil Nadu cabinet must meet immediately and adopt a resolution on the matter and send it to the Governor, the DMK demanded.