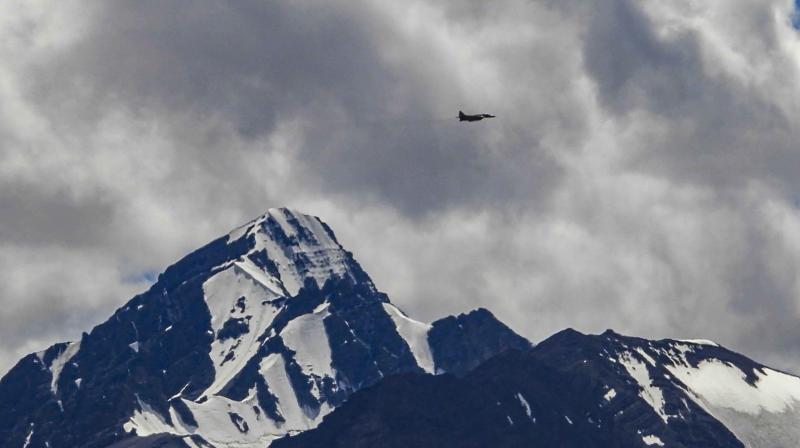 An IAF fighter jet flies over the UT amid the prolonged India-China stand off in the region, in Ladakh, Sunday. (PTI)

New Delhi: China's People's Liberation Army has confirmed that five youths missing from Arunachal Pradesh have been found by them and their handing over process to Indian authorities is being worked out, Union minister Kiren Rijiju said on Tuesday.

The five youths had gone missing on Friday from the Sino-Indian border in the Upper Subansiri district of Arunachal Pradesh.

"China's PLA has responded to the hotline message sent by Indian Army. They have confirmed that the missing youths from Arunachal Pradesh have been found by their side. Further modalities to handover the persons to our authority is being worked out," Rijiju tweeted.

Rijiju, the Minister of State for Youth Affairs & Sports, hails from Arunachal Pradesh and is an MP from the state.

The incident of five missing youths came to light when two members from their group, who had gone for hunting in the jungle together, returned home and informed the families of the five that they had been whisked away by the Chinese troops from Sera-7, an Army patrol zone located about 12 km further north of Nacho.

Nacho is the last administrative circle along the McMahon Line and is around 120 km from the district headquarters Daporijo.

Those who were allegedly kidnapped by the Chinese army have been identified as Toch Singkam, Prasat Ringling, Dongtu Ebiya, Tanu Baker and Ngaru Diri.

An Army official said, "As a result of persistent efforts of the Indian Army, five missing hunters from Indian side of LAC in Upper Subansiri, who had inadvertently crossed over to other side on 02 Sept 2020, were traced. The Chinese Army on September 8 responded on Hotline and confirmed that the missing Indians have been found on their side. Formalities for their early transfer is being coordinated with the Chinese Army."

On Monday, China brushed off questions over the whereabouts of the five youths and needled India, saying it has never recognised Arunachal Pradesh which it claims is part of south Tibet.

"China's position on the east sector of the China-India boundary, or Zangnan (the southern part of China''s Xizang (Tibet) ), is consistent and clear," Chinese foreign ministry spokesperson Zhao Lijian told a media briefing in Beijing, adding the Chinese government has never recognized the "so-called Arunachal Pradesh".

"I'm not aware of the situation you mentioned," the spokesperson said when asked about any updates about the missing Indian nationals.

The development comes at a time when the Indian army has enhanced its deployment along the 3,400 km-long Line of Actual Control (LAC) in view of the tense border situation with China in eastern Ladakh.

In March, a 21-year-old man was abducted by the PLA from Asapila sector near the McMahon Line.

While his two friends managed to escape, Togley Sinkam was taken away at gunpoint, his family had said.

He was released by the Chinese army after 19 days in captivity.

The Indian Army had on September 2 provided food, warm clothes and medical assistance to three Chinese citizens who had lost their way in sub-zero temperatures at an altitude of 17,500 feet in a border area in North Sikkim.

The Indian Army personnel deployed in the area also guided the Chinese citizens, including a woman, to return to the Chinese side and reach their destination.