India   All India  08 Sep 2020  India refutes China's claim, says it did not trangress across LAC and fire shots
India, All India

India refutes China's claim, says it did not trangress across LAC and fire shots 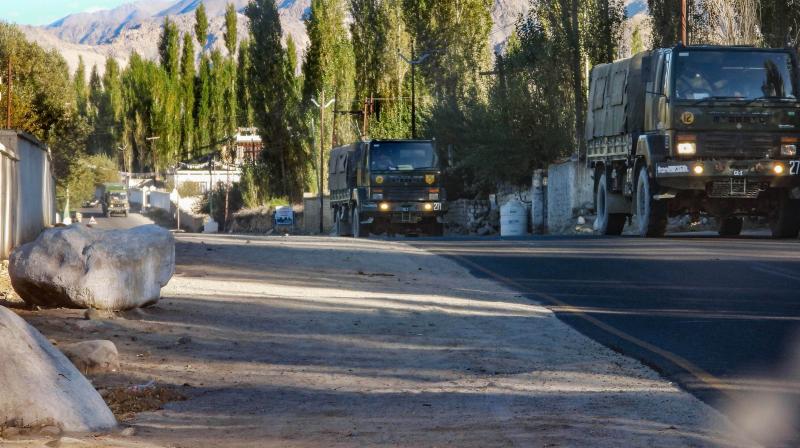 Army vehicles move towards eastern Ladakh amid the prolonged India-China stand off, in Leh, Tuesday.

The Indian Army on Tuesday rebutted the Chinese claim that Indian troops illegally crossed the LAC and fired warning shots at Chinese troops, saying that it did not transgress across the Line of Actual Control(LAC) or resort to use of any aggressive means in eastern Ladakh.

The Chinese People's Liberation Army(PLA) late on Monday night had alleged that Indian troops crossed the LAC and "outrageously fired" warning shots near the Pangong lake in eastern Ladakh.

The relationship between the two nuclear-armed neighbours has deteriorated since a clash in the Ladakh region on June 15 in which 20 Indian troops were killed.

In a statement, the Army said it was the PLA that has been blatantly violating agreements and carrying out aggressive maneuveres, while engagement at military, diplomatic and political levels is in progress.

"In the instant case on September 7, it was the PLA troops who were attempting to close-in with one of our forward positions along the LAC and when dissuaded by own (Indian) troops, PLA troops fired a few rounds in the air in an attempt to intimidate own troops," the Army said.

It said despite the "grave provocation", Indian troops exercised "great restraint" and behaved in a mature and responsible manner.

"At no stage has Indian Army transgressed across LAC or resorted to use of any aggressive means, including firing."

The Army termed the statement issued by the Western Theater Command of the PLA as an attempt to mislead their domestic and international audience.

"The Indian Army is committed to maintaining peace and tranquility, however is also determined to protect national integrity and sovereignty at all costs," the Army said.

Senior Colonel Zhang Shuili, a spokesperson of PLA's Western Theater Command, in a statement had alleged that Indian troops again illegally crossed the LAC and outrageously fired warning shots on Chinese border patrol soldiers who were about to negotiate.

"The Chinese border defence troops were forced to take corresponding countermeasures to stabilise the terrain situation," said Zhang, spokesperson for the Western Theater Command of the People's Liberation Army (PLA). Zhang said India had violated agreements reached by the two countries and warned their actions could "easily cause misunderstandings and misjudgments".

The Indian troops crossed the LAC at the west section of the China-India border into the Shenpao mountain region near the south bank of Pangong lake, he alleged. He had also called for India to withdraw the troops who crossed the border and investigate the officers who opened fire.