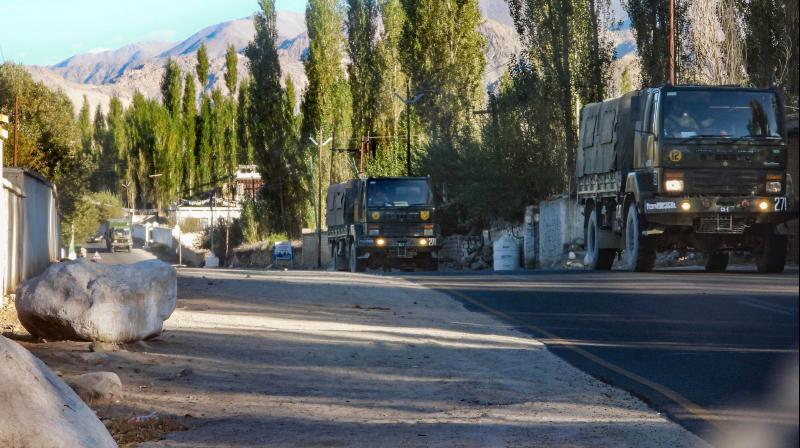 PLA soldiers seen in the general area of Mukhpari and Rezangla in Ladakh. The Indian Army said PLA soldiers attempted to capture an Indian post armed with machetes, spears and guns.

New Delhi: In a major escalation, the Indian Army said Chinese troops fired shots in the air on Monday to intimidate its soldiers as PLA troops failed to capture an Indian position in the Chushul sector. This is for the first time in 45 years that a shot has been fired at the Line of Actual Control (LAC). The whole Ladakh sector is on a knife edge.

The Cabinet Committee on Security headed by prime minister Narendra Modi held a meeting on Tuesday as tension with China is escalating in Ladakh. The committee the aggression shown by the Chinese army.

The September-November period is crucial as some call it the “campaign season” when climate is ideal for a war before snowfall blocks many of the crucial passes in Ladakh.

The Chinese army has been taken aback by India’s pre-emptive move to occupy some two dozen strategic heights on the southern banks of Pangong Tso on the intervening night of 29-30 August 2020 to dominate the area and keep a watch on a Chinese garrison below.

According to sources, Chinese troops on Monday night armed with primitive weapons, which looked like their traditional Guandao weapon (a single-edge blade on the end of a pole), and guns attempted to dislodge Indian troops from the heights of Mukhpari which is one of the highest peaks in the Chushul sector.

Since Indian soldiers were on the heights they could see Chinese action and they warned the Chinese to move back.

The Indian Army has now changed the rules of engagement after the Galwan Valley clash on June 15 where Chinese used improvised weapons including iron rods studded with nails to attack Indian soldiers. Now Indian army’s local commanders are free to use any weapon under their command if they are threatened by Chinese troops.

Still some 30-40 PLA soldiers are involved in a direct face-off with Indian soldiers in the general area in Mukhpari. The situation in the area is tense and even a small incident can trigger a big escalation.

Brigadier level talks were held on Tuesday to try to deescalate the situation.

The Indian Army dismissed Chinese allegations that Indian troops had crossed LAC at Pangong Tso on Monday and had fired shots in the air when approached by a PLA patrol.

Chinese actions came four days after defence minister Rajnath Singh had told Chinese defence minister General Wei Fenghe in a meeting in Moscow on Friday not to try to change the status quo at the LAC.

External affairs minister S Jaishankar, who is expected to meet Chinese foreign minister Wang Yi in Moscow this week admitted that the situation in eastern Ladakh is "very serious" and called for "very very deep conversation" between the two sides at a political level.

In New Delhi a series of high level meetings were held on the evolving situation in the Ladakh sector.

Meanwhile, China on Tuesday hoped disengagement can be achieved as soon as possible through mutual consultations, flagging approaching harsh winter in the region.

We all hope our troops get back to their camping area and there won't be any more confrontation in the border areas. You know that place has a very bad natural condition and it is above a height of 4,000 metres. In winter this is not good for humans to live. So we hope, through diplomatic and military channels and through consultations on the ground we can achieve disengagement as soon as possible and reach consensus,” said Chinese Foreign Ministry spokesman Zhao Lijian.

Asked about Indian allegations that it was Chinese troops which took provocative steps first, the Chinese spokesperson read out the statement of the PLA's Western Theater command spokesman on Monday alleging that Indian troops illegally crossed the LAC and outrageously fired warning shots on Chinese border patrol soldiers forcing them to take countermeasures.

“I also want to stress in this incident, the Indian side fired shots to the Chinese border troops first. This is the first time since 1975 that the tranquility is interrupted by the shots. And the Chinese side always stresses that both sides should peacefully settle our differences through dialogue and consultations. Confrontation won't benefit either,” he said.

The Indian Army on Tuesday in a statement said that at no stage had its soldiers transgressed across the LAC or resorted to use of any aggressive means, including firing. It said it was the PLA that has been blatantly violating agreements and carrying out aggressive manoeuvres, while engagement at military, diplomatic and political level is in progress.

“In the instant case on 7 September 2020, it was the PLA troops who were attempting to close in with one of our forward positions along the LAC and when dissuaded by own troops, PLA troops fired a few rounds in the air in an attempt to intimidate own troops,” it said.

However, despite the grave provocation, own troops exercised great restraint and behaved in a mature and responsible manner, said Indian Army. “The Indian Army is committed to maintaining peace and tranquility, however is also determined to protect national integrity and sovereignty at all costs. The statement by the Western Theatre Command is an attempt to mislead their domestic and international audience,” added Indian army.