India   All India  08 Oct 2018  Schools must encourage independence of thoughts
India, All India

Schools must encourage independence of thoughts

India has the largest youth population in the world. Most of them are unable to find fruitful employment. 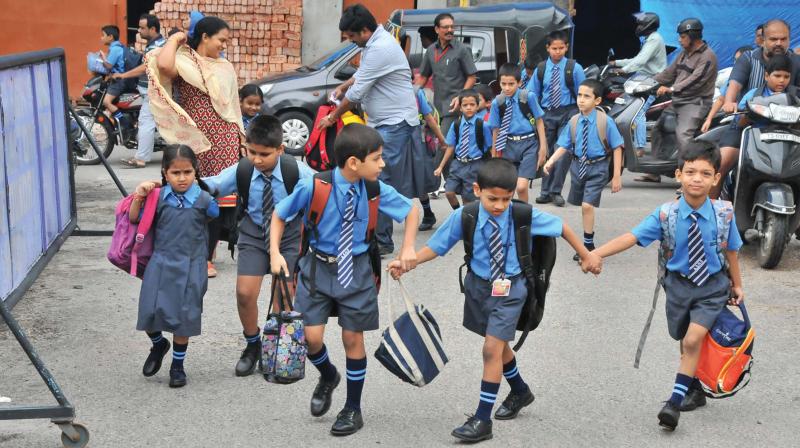 In the race for marks and admissions, our schooling methodology may have become mere rote learning with no real sense of purpose than to get those numbers in the exams. I sometimes look at the figures. How many children make it to the IITs? How many join medical colleges? A very, very, small percentage. What about the rest? Are we doing enough to fire their creativity, so they shine in any field they chose to work in?

I established my school a little more than 10 years ago. My burning desire was to provide a nurturing teaching environment to the students who came to my school to study.

My search for good teachers, who were passionate about their work and conscious of the role they played in a child’s life, began in right earnest.

The school is now well established, but I always want to see how we are readying children for the real world. How practical is our education? What sort of skill sets does it bring to the table? A conversation with another educator who runs a large group of institutions was very interesting. He said that the future education in our country is going to be entirely skill based. Instead of classrooms, there will be skill labs. Students will learn skills, which will make them employable as soon as they want to work. They will learn the art of good communication and the ability to do something in the field of work. India has the largest youth population in the world. Second, perhaps only to China. Most of them are unable to find fruitful employment. We have to make sure our teachers are geared to be facilitators in learning. They must encourage independence of thought and develop the minds of their students to the fullest. Rote learning and old fashioned pedagogy should be on it’s way out.

A story I heard from a nursery teacher is still fresh in my mind.

She told me about a small school in a village, situated near the village chaupal. The area bustled with activity and the school’s building was tucked away in the far left corner of the compound, nestling under leafy trees, which seemed to have been there forever.

Rama would come to the village every day. She took a bus from the nearby town and was the small village’s Teacher didi as her class of 12, sometimes 9 students called her. Her students were small children, the youngest was nearly three years old and the oldest was about four.

That day she rung the gong and waited for her class to collect. The watchman, a nice respectful man dusted her cane moodha for her, set up her blackboard and placed the box of chalk nearby for her to use. The students would sit on a mat. The weather was nice in the villages; somehow the trees seemed to bring the temperatures down considerably.

She waited as Abdul, Rita, Meena, Ravi, Joseph, Alka, Gurjeet and three others filed in, greeting her cheerfully and waiting for her customary pat on their shoulders, the way she ruffled their hair and her general display of affection. She noted with satisfaction that all the kids were neatly turned out and had even combed their hair.

Rama intended to teach the class about shapes that day and waited for Rahim to come. He was late and when he did tear into the classroom his face was flushed with excitement. He was holding a bird’s nest in one hand and his school bag in the other.

“Look what I found, didi!” he exclaimed.

The class was distracted and Rahim’s excitement was infectious. Rama groaned. There goes her class she thought.

But Rama knew a good teaching opportunity when she saw one. She didn’t answer Rahim’s question-cum-delighted statement. Instead she asked the class to settle down and took the nest from her student’s hands.

“Hmm!” said Rama. “This looks interesting, I wonder what this is?”

The class began making guesses. She made the children sit in a circle and handed the nest to the child closest to her. “Tell us what you see,” she asked.

Abdul was first. “Ewww it’s prickly, Didi” he said. Rita thought the funny thing had a decidedly dirty smell. Gurjeet noticed it was round and was it not a bit like the bowl they had at home? Joseph exclaimed that it was an egg box. And Abdul happily announced he had eaten an egg for breakfast. Immediately Meena said rather seriously that Abdul was sure to fall ill as eggs have little birds in them and his stomach ache was about to begin.

Rama allowed them their curiosity and let them talk about the round nest. She noticed that Abdul looked a bit worried and had touched his tummy anxiously and she made a mental note to talk about different kinds of food later sometime. She was a sensitive teacher and was finely tuned to her students.

What a wonderful class it was! Each child used his mind and senses to describe the object best he/she could and learned about shape, texture, smell, and later about the function of nests. There was no spoon feeding.

Rama knew she could return to her lesson on ‘shapes’ another day and cashed in on a wonderful learning /teaching moment! She knew her role as a teacher was primarily one of somebody who facilitates learning by opening out the children’s senses to the wonders of the world. Once that basic deed was done, she knew they would be learners for life, with or without a teacher.

Rama’s story inspired me greatly. I realise that in the race for marks and admissions, our schooling methodology may have become mere rote learning with no real sense of purpose than to get those numbers in the exams. I sometimes look at the figures. How many children make it to the IITs? How many join medical colleges? A very, very, small percentage. What about the rest? Are we doing enough to fire their creativity, so they shine in any field they chose to work in?

Are we encouraging our teachers to be like Rama? If we are not, high time we began.

The writer is the chairperson of the AICC grievance cell