India   All India  08 Oct 2018  The troubled genius: Snapshots of life with yusuf
India, All India

The troubled genius: Snapshots of life with yusuf

My relationship with my dad was complex, to say the least. 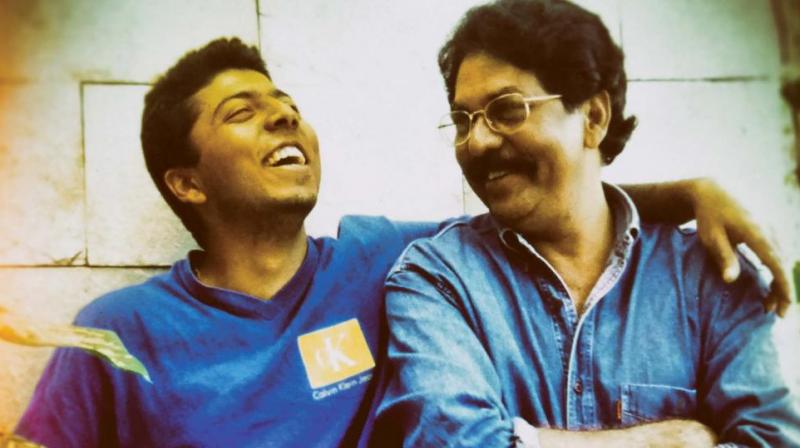 Few people in the art world can recall Yusuf Arakkal without a smile. His art captivated his audience’s soul, while his gregarious, always-willing-to-help nature found a special place in the hearts of everyone who met him. Beneath the amiability lay a complex, often troubled individual, whose soul had experienced suffering and loneliness of the sort from which there is no return. And it was his son, Shibu Arakkal, now a well-known photographer, who grew up with it all, from the prestige that comes with being the son of a great artist, to dealing with his larger-than-life personality, flaws and all. Growing up immersed in art and philosophy has lent itself to Shibu’s intellectual understanding of the world, but as he looks back, the moments of turmoil and confusion (and there were many) lend themselves to the artist within. The answers might not always be evident but as the famous portrait photographer, Yousuf Karsh once said, “If you can photograph people objectively, you can nearly portray their spirit.” With October 4 marking the artist’s second death anniversary, Shibu tells Darshana Ramdev about growing up as the son of Yusuf Arakkal and the self-described man of philosophy it has made him today.

How did growing up in a house surrounded with art influence your life decisions?
Even though my dad’s most important preoccupation and his deepest purpose was his art, outside of that, our most immediate concern was life itself and how to get by. My early growing up years were spent being raised by my maternal grand parents whom I adored, especially my grandfather. It was only in my high school years that I went to live with my parents and at the time, my father worked a day job in HAL. Even when I did begin experiencing the art, I didn’t understand it – I remember not thinking too much of dad’s work for a long time. Subconsciously, of course, I absorbed a great deal. For instance, that norms are relative to people and anything worth doing is worth doing with pride and diligence.

We remember Yusuf Arakkal’s larger-than-life public persona. Maintaining a relationship with someone who was so much in the public eye is difficult when you’re family, or share a special bond. What was your relationship with him, especially after you decided to focus on art and photography?
My relationship with my dad was complex, to say the least. But we knew we had a special bond and that we loved each other very much, for the most part. I was well into my thirties when I realised that him putting his work ahead of his family meant he needed to fulfil his purpose in life, which also meant taking care of us. Before that, it was extremely difficult to accept that my dad wasn’t like the others. But what I lost in terms of the norm, I gained in terms of life lessons.

I can say emphatically that I disliked being hauled up to say hello to the guests who poured in almost everyday. Of course, being considered Yusuf Arakkal’s son does amazing things to a young male’s sense of pride and purpose. And in hindsight, while my doing photography seems a no-brainer, it came after I tried several different vocation ideas. When I decided on photography, my dad was the one who showed me I can be just as artistic and successful as him, if not more.

Tell us about Yusuf Arakkal’s inner world, his best and his most difficult traits.
My father was a very complex man. He had seen a privileged life and one of despair and poverty. His ability to relate to other people regardless of their social class came from his understanding of what this world really is all about. He was a man of many flaws, like any other. He found life to be ever so lonely, even with having a family and all. And there was the Kannur blood, which made him a man of absolute tranquility one moment and then of violent rage the next, which I do relate to. He didn’t have it in him to regret the past, was stubborn as a mule but could also be quite fickle. It made him a difficult family man.

How did he react to you wanting to be an artist? Were either of you wary of your being caught in his shadow?
His greatest fear, by his own admission, was that I would end up an artist. He had seen what that did to sons and daughters of some well-known names in Indian art. The comparisons, the loss of one’s own identity were fairly obvious. To his credit and maybe also because he saw some genuine talent in my voice and expression, made him the most supportive human being I have had in my life, as far as my work is concerned. And when I reached a certain level of understanding, he let me criticise his work, brutally. I didn’t disappoint. I know he didn’t like the fact that I had to fight thrice as hard to earn something, as opposed to someone without a famous father. But for me, that became a lesson in wisdom, too.

You both said, in an interview, that young artists and photographers are in a rush to exhibit their work. Do young artists prioritise making a name over finding their voice?
I like to think that I have reached a point of relative wisdom, where the art, certainly the kind that matters, comes from struggles that most people don’t experience. And I think, to expect everyone who practices art to be so connected to their own struggles might be a naive endeavour. Because if you have always taken the road less-travelled and made tough decisions, then your art will not only show that but it will be kicking to come out.  Maybe it’s my upbringing or what I have learnt from my dad’s life, anyone who really wants to practice art has got to know how very difficult life is going to be.

Technology has revolutionised art. What are the pros and cons?
As man progresses, technology will advance and as such, it will merely become another tool or technique at an artist’s disposal. The important thing is what he or she does with it. If your life itself has nothing significant to say and you as an artist don’t have the ability to effectively convey your thoughts, all the technology in the world will at best make you mediocre.

Your father was a prolific painter, who held discipline above everything else. How do you function, as an artist?
That is something I learned from him and I hold it very highly too. Although our mediums differ, the days I don’t adhere to my routine and actually work, which are few and far between, are the days I feel disconnected from my path. If all you can think about is art or anything else for that matter, discipline comes easily, else it’s simply tedious.

Are there any traits in your father that you want to emulate? And having said that, are there somethings you would like to do differently?
To the latter part of the question my answer is, many, and I think I have already imbibed and continue to uphold several of his traits. But in a lot of ways, my dad and I are like apples and oranges. The differences are actually too many to mention but let’s just say that we were born in different times, with different influences and different upbringings.

Is carrying his legacy forward important to you?
I don’t believe in the notion of one’s legacy being carried forward by another, I don’t think my dad did either. I believe that a man’s purpose is linked to his direction, and when he finds it, it becomes his life preoccupation and takes over his identity. His life was a complete book and mine will be another.