The ceremony coincided with the foundation ceremony of the IAF. 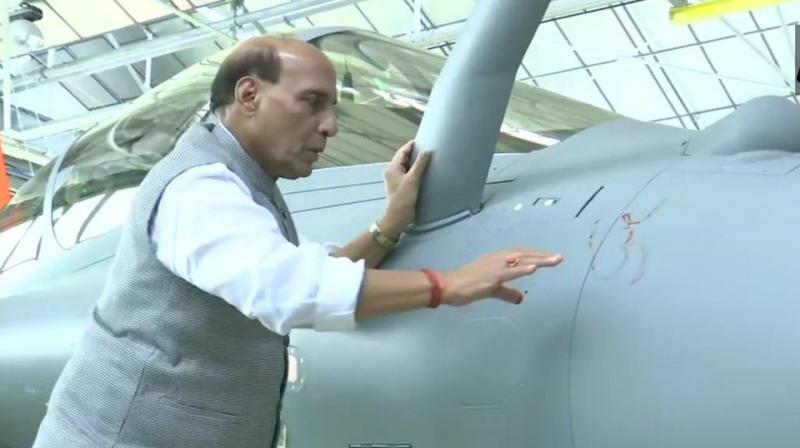 The minister will perform the Shastra Puja on the auspicious occasion of Vijayadashami and fly a sortie in the Rafale fighter aircraft. (Photo: ANI)

Singh received the aircraft at the Rafale fighter jet handing-over ceremony at Merignac in the presence of French Minister of Armed Forces Florence Parly. Members of the top military brass of France as well as senior officials of Dassault Aviation, the makers of Rafale, were also present at the ceremony.

The RB in the tail number denoted the initials of Air Chief Marshal Rakesh Bhadauria who played a key role in the signing of the biggest ever defence deal of India worth above Rs 60,000 crore for 36 fighter planes.

The ceremony coincided with the foundation ceremony of the IAF.

Singh arrived in France for a three-day visit on Monday. Upon the arrival, the Defence Minister tweeted that the visit was aimed at expanding the existing strategic partnership between both the countries.

"Bonjour Paris! Delighted to be in France. This great nation is India's important strategic partner and our special relationship goes far beyond the realm of formal ties. My visit to France is aimed at expanding the existing strategic partnership between both the countries." the tweet read.

"Naturally, everyone is excited about Rafale coming to India and Rafale will be handed over tomorrow (Tuesday), you too should witness the ceremony," Singh told ANI.

Earlier today, the Defence Minister held a meeting with French President Emanuel Macron during which the two leaders resolved to take the relationship between the two countries to the next level. Singh described the meeting as warm and productive and said it demonstrated the depth of India-France bilateral partnerships, "especially in the defence sector, which has significantly strengthened in recent times."

The minister will perform the Shastra Puja on the auspicious occasion of Vijayadashami and fly a sortie in the Rafale fighter aircraft.