Will it be BJP-JDS 2.0 in Karnataka soon?

Would prefer to extent outside support to the BJP government to ensure it lasts till 2023 when the polls are due, said sources. 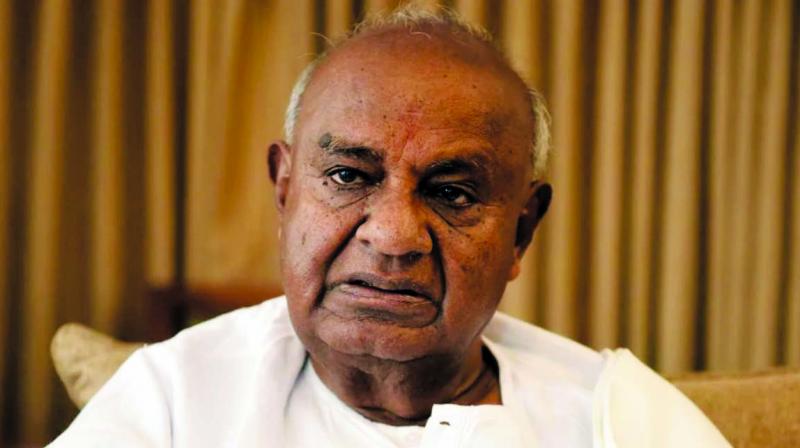 Bengaluru: After being ousted from power earlier this year in July in a coup engineered by the BJP, the Janata Dal (Secular) is reportedly preparing the ground for a turnaround of sorts by exploring the possibility of tying up with the same party soon after the results of the bypolls to 15 Assembly constituencies are over in December.

What has created ripples in political circles is the statement of JD(S) supremo H.D. Deve Gowda that his party will return to power in the state within a few months.

Strengthening the rumours are reports of recent telephone conversations between Deve Gowda and chief minister B.S. Yediyurappa which has given credence to the possibility of another coalition government if the BJP fails to win a majority of the 15 seats going to polls in December and finds itself in a vulnerable situations vis-a-vis the Opposition Congress and JD(S).

The first coalition government of the BJP and JD(S) which was formed in 2006 with H.D. Kumaraswamy as CM under a 20:20 month power sharing pact, collapsed in 2007 after Kumaraswamy refused to transfer power to the BJP.

Highly-placed sources told this newspaper that Mr Deve Gowda is now holding consultations with his party MLAs on whether they should extend support to the BJP government from outside or be a part of it.

Mr Gowda is reportedly of the view that the disqualified MLAs would find it difficult to win the bypolls with the popularity of the ruling BJP on the wane in the Mumbai-Karnataka and Hyderabad-Karnataka regions primarily because of its failure to address the woes of flood victims.

According to his perception, the Dal may be able to retain all the three seats going to the bypolls but the majority of the remaining 12 seats may be won by the Congress. If the BJP sponsored candidates fail to win at least eight Assembly seats, the Yediyurappa government may face a threat to its existence throwing up the possibility of the JD(S) acting as a prop to save the government by offering its support.

What has strengthened the possibility of the JD(S) backing the BJP is the fact that the majority of JD(S) MLAs who attended the meeting called by Deve Gowda, are not prepared — mentally or financially — to face the people again in a snap poll. And after the bitter experience it had with the Congress in a  coalition government, the JD(S) would not like to burn its fingers again and would prefer to extent outside support to the BJP government to ensure it lasts till 2023 when the polls are due, said sources.

Sources said the party supremo is planning to hold another round of meetings with all legislators once the top court delivers  its verdict in the disqualified legislators’ case.