India   All India  08 Nov 2020  Kamala Harris' native villages in Tamil Nadu celebrate her win as US Vice-President
India, All India

The villages, which are native to her maternal grandparents, were keenly waiting the outcome 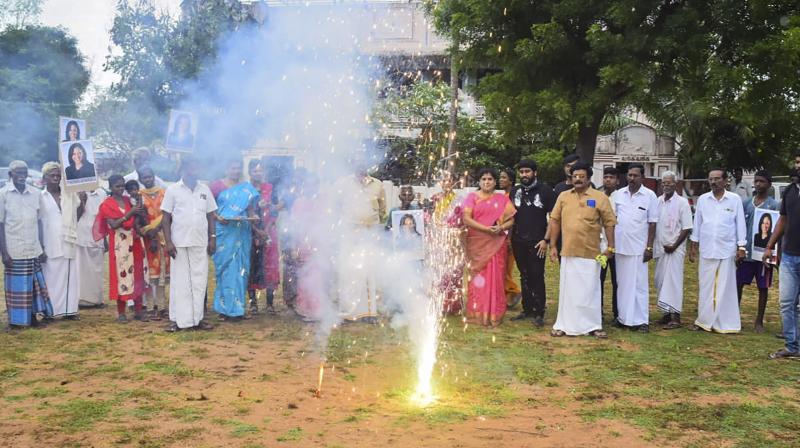 Villagers burst crackers to celebrate the victory of U.S. Vice President-elect Kamala Harris in Painganadu a neighboring village of Thulasendrapuram, the hometown of Harris' maternal grandfather, at Thulasendrapuram in Chennai, Sunday, Nov. 8, 2020. (PTI)

Tiruvarur : The ancestral villages of US Vice-President elect Kamala Harris in Tamil Nadu on Sunday erupted in joy over the Democrat Senator's elevation and ushered in an early Deepavali with firecrackers and sweets to celebrate her win.

The joy of locals in Thulasenthirapuram and Painganadu villages in this Cauvery delta district knew no bounds as they rejoiced the victory of "the woman of our house".

The villages, which are native to her maternal grandparents, were keenly waiting the outcome and once President elect Joe Biden triumphed against incumbent Republican President Donald Trump, it was evident his running mate Harris would be his deputy.

The villagers had earlier held special prayers for Harris' win and once they were answered, celebrated it with much fanfare on Sunday.

The locals celebrated 56 year-old Harris' win by bursting crackers and distributing sweets, even as reports suggested that special prayers could be held later in this connection.

A local at Painganadu who drew a large 'kolam' (Rangoli) was all smiles when she hailed the victory of the "woman of our house."

The colourful 'kolam' hailed Harris as the 'pride' of the village.

The villagers had already kept the crackers ready in anticipation of Harris' win, even as the people were proud that their villages happen to be the native place of the grandparents of Kamala Harris.

Thulasenthirapuram and Painganadu are agrarian villages and are located very close to each other near Mannargudi in the district.

Harris' grandfather P V Gopalan moved out of Thulasenthirapuram village as a young man and took up a job in the British government service.

Her grandmother Rajam belonged to the nearby Painganadu village.

Though Kamala's ancestors left the village many decades ago, family members had kept their connections with the temple at Thulasenthirapuram intact.