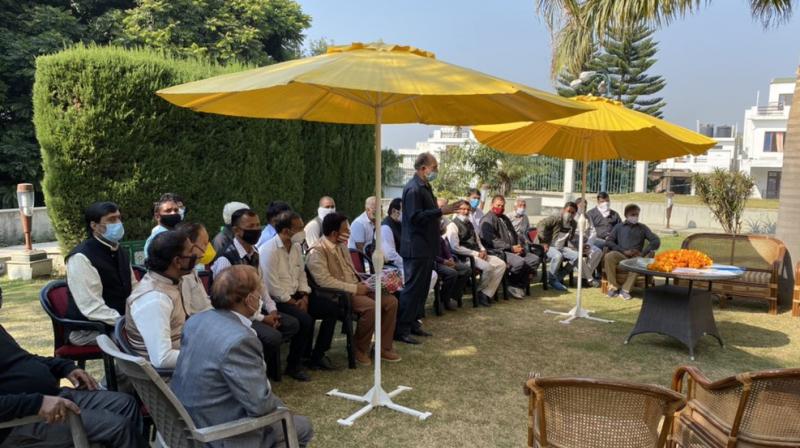 SRINAGAR: In a significant development,  a recently formed alliance of Jammu and Kashmir's regional Opposition parties and their allies from the Left parties has decided to contest the upcoming elections for the District Development Councils and vacant seats of Panchayats in the Union Territory (UT) "unitedly".

After holding day-long deliberations at the residence of its president and former chief minister Farooq Abdullah in winter capital Jammu on Saturday, the 'People's Alliance for Gupkar Declaration (PAGD)' spokesman Sajad Gani Lone said that its seven member parties will unitedly fight these elections.

He said, "The PAGD has unanimously decided to fight the DDC elections unitedly. Despite the abruptness of the DDC elections in terms of timing it is important that this sacred space in democracy is not allowed to be invaded and marauded by divisive forces."

The J-K administration had earlier this week announced to hold the first ever DDC elections in eight phases from last week of November in the UT. Also, the elections for the vacant seats of panchayats and Urban Local Bodies (ULBs) will be held simultaneously, State Election Commissioner (SEC) KK Sharma had said.

Lone said that the leadership of PAGD has over the past two days met members of civil society, leaders or representatives of various political parties and those of various community groups  including Gujjar and Bakarwals, SC/ST and Dalits. "All of them are hurt by the decisions of August 5, 2019", he claimed.

National Panthers Party (NPP) supremo Bhim Singh also attended Saturday's meeting and "opened up his heart" on the the Centre's stripping J-K of its special status and splitting it up into two UTs on August 5 last year and the subsequent moves particularly the recent introduction of new land lawas for J&K. But soon after the meeting, a NPP leader claimed that Singh has been relieved of his responsibilities in the party over his participating in the PAGD meeting without taking it into confidence.

While the meeting was underway in Bathindi area of Jammu, groups of Shiv Sena, Ikk Jutt Jammu and Rashtriya Bajrang Dal (RBD) workers held protest demonstrations at a distance to express their displeasure over some of the recent statements of PAGD leaders, particularly by Farooq Abdullah and Mehbooba Mufti.

The police swung into action and took many of the protesters into custody, witnesses said. They were, however, later released, the police sources said.