India   All India  08 Nov 2020  Primer | What's #SaveMollem protest and why are Goans protesting?
India, All India

Primer | What's #SaveMollem protest and why are Goans protesting? 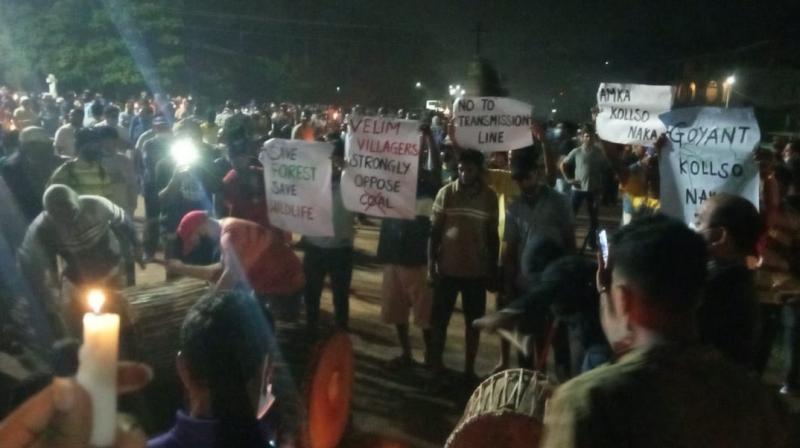 A peaceful protest at Chandor Goa against the building of double-tracking for coal transportation. (Twittter)

Since many year now, Goa, a dream holiday spot for tourists across the world, has been struggling to protect its identity and its natural diversity from the industrial onslaught. In a recent development, three projects – the four laning of the NH4A, double tracking of the railway line and the laying of a 400kV transmission line – threaten the forests in and around Bhagwan Mahaveer Wildlife Sanctuary and Mollem National Park in Goa. With the issue slowly gaining prominence in the mainstream media, here is a brief primer on the issue.

WHAT IS THE ISSUE ABOUT

The four laning of the NH4A and double tracking of the railway line are two out of the 30 projects that has been cleared by the Ministry for Environment, Forests and Climate Change during the lockdown.

Along with laying of a 400kV transmission line, the road and railway project could lead to one lakh trees being cut, 59,000 of them in Goa. The projects are likely to cause a loss of 170 hectares of protected forest land in Bhagwan Mahavir Wildlife Sanctuary and Mollem National Park.

Environmentalists, activists and various social media users are now highly concerned about the disruption  of Goa’s biodiversity. Many locals feel that the cost to be paid in exchange for making Goa a commercial coal hub is not justifiable.

The public outrage is by far limited to the handful of people who are aware about the issue, while the state government has tried to downplay the situation by rapidly sanctioning permissions during the lockdown.

To save their land from being exploited for commercial purposes, the residents of Goa have been opting for creative ways of protesting against the decision on felling of trees.

One such protest took place on the night of November 1, when more than 5,000 locals gathered at Chandol village in the Western Ghats to dance and sing in solidarity with the forests. Some also  performed the Kunbi (a local folk dance) near the railway line.

However, the peaceful protests by Goans have been dismissed by the government as "politically motivated protests by outsiders"

Goa Tamnar Transmission Project Ltd (GTTPL) in its statement has tried to downplay the impact of these development projects on the ecology, claiming only 1,000 trees will be felled in the wildlife sanctuary.

GTTPL has been quoted by The Times of India as saying, “The forest tree enumeration stands at 43,201. However, actual felling or trimming of trees in the forest area would be 14,700, which is just 35% of the enumerated quantity. Moreover, as per the prevailing regulations, payments against the enumerated 43,201 forest trees, are being paid to the forest department. Out of the 14,700 trees expected to be felled/trimmed, only 1,000 trees would be felled/trimmed in the wildlife sanctuary.”

The government has been trying its best to defend the move in the name of public interest. Goa's environment minister Nilesh Cabral has said that the double-lining of railways will help trains pass through the Western Ghats swiftly. He has also argued that trains travel through the region at 40 kmph burning more fossil fuel than necessary.

In addition, objections raised in the Environment Impact Assessment reports for the projects have been overlooked on the basis of “mitigation measures” suggested by the Chief Wildlife Warden.

While the projects have been passed in the name of "public interest", the ground reality recites a different tale. These projects, according to activists, allegedly serve the vested interests of corporates and investors who aim to convert Goa into a coal transportation hub.

The Mormugao Port Trust (MPT) is at the centre of the whole issue. It is well connected through the South Central Railway and the NH17A, NH17B and NH4A.

On November 5, one of the stakeholders of this project, Adani Group, took to social media to deny the claims of activists, environmentalists and journalists.

As per the 19th Electric Power Survey, the domestic consumption of electricity in Goa stands at 26.91 per cent for the year 2021-22. The commercial and industrial consumption stands at 65.63 per cent which, according to a report in The Wire, makes it evident that the three development projects will come at the cost of Goa's natural ecology.

Following the successful social media outrage against the destruction of Aarey Forests in Mumbai, the destruction of area in and around Mollem Wildlife Sanctuary has also gained momentum. While most people on social media are shaming the government for their decision, few supporters of the ruling BJP have also claimed that the protest is nothing but a political agenda of the Opposition.

Govt led by @DrPramodPSawant Sir wants to destroy this beautiful Mollem Forest to open for coal mining and railways lines and other projects. It is also a national park. This will endanger the lives of thousands of people & the wildlife of Mollem. Plz reconsider the decision. 🙏🏻 pic.twitter.com/x0yLtALxSc

Govt led by @DrPramodPSawant Sir wants to destroy this beautiful Mollem Forest to open for coal mining and railways lines and other projects. It is also a national park. This will endanger the lives of thousands of people & the wildlife of Mollem. Plz reconsider the decision. 🙏🏻 pic.twitter.com/x0yLtALxSc

Bollywood actor Randeep Hooda and Congress MP Shashi Tharoor have also raised their voice against the destruction of Goa's biodiversity.

Let’s stand with Goans protesting the proposed loss of 70k trees & destruction of biodiversity hub in #Mollem a #Tiger habitat for doubling the railway line to make Goa into a Coal transport hub instead.Why not go around the Eco sensitive zone? #SaveMollem https://t.co/9r1k82qH93 pic.twitter.com/c5mDfnjEEs

Thousands of Goa residents protest at Govt plans to make the state a coal hub: https://t.co/yVosY6mDxO The proposed 400 KV line through a wildlife sanctuary &National Park along the Western Ghats will choke the lungs of Goa. But w/this govt, crony capitalists prevail over people!

Fridays for Future India's official Twitter handle has been leading a social media campaign for mobilising youth to stand in solidarity with Goa.

(1/2)
Citizens across India strike to Save Mollem National Park..
In solidarity with Goans taking stand for their forests and saying no to Coal..#SaveMollem #AmcheMollem #GoyantKollsoNaka pic.twitter.com/BcTVQi5NOD