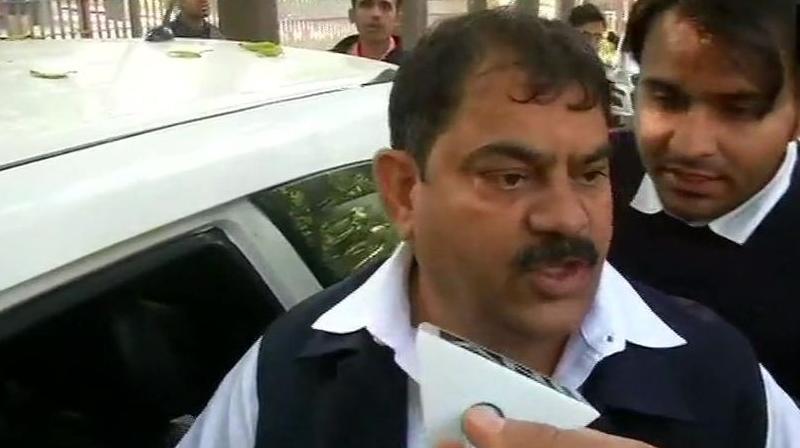 'Searches are on at my residence. What will they get when there is nothing. They are taking me to ED office for questioning,' Congress worker Jagdish Sharma told ANI. (Photo: ANI)

New Delhi: The Enforcement Directorate (ED) on Saturday conducted a raid at the residence of Congress worker Jagdish Sharma.

Sharma, who is believed to be a close aide of businessman Robert Vadra, has also been taken to the ED office for questioning.

"Robert Vadra is being framed. The Modi government wants to trap Robert Vadra. Searches are on at my residence. What will they get when there is nothing. They are taking me to ED office for questioning," Sharma told ANI.

On Friday, the ED conducted raids at the premises of some close associates of Vadra, son-in-law of UPA Chairperson Sonia Gandhi for allegedly receiving money from defence suppliers, according to sources in the investigating agency.

The raids were conducted at three places in Delhi and Bengaluru, the ED sources said.

While Vadra's advocate Suman Khaitan cried foul, ED sources said the investigating agency has "evidence" that the persons being raided had received money in their bank accounts from defence suppliers.

Khaitan claimed that the ED officials raided "close associates" and business partners of Vadra without even showing any search warrants.

Vadra had earlier this week alleged that the corruption probe against him was the result of a political witch-hunt aimed at "besmirching his dignity and reputation".

In a Facebook post, Vadra claimed that the authorities were well aware of the fact that there was no case against him, adding that the proceedings were a mere "media circus" to distract the public.