India   All India  08 Dec 2018  Navjot Singh Sidhu, Amarinder Singh tussle is far from over yet
India, All India

Navjot Singh Sidhu, Amarinder Singh tussle is far from over yet

Sidhu went to the Kartarpur ground-breaking ceremony to Pakistan even as chief minister Captain Amarinder Singh declined the invitation. 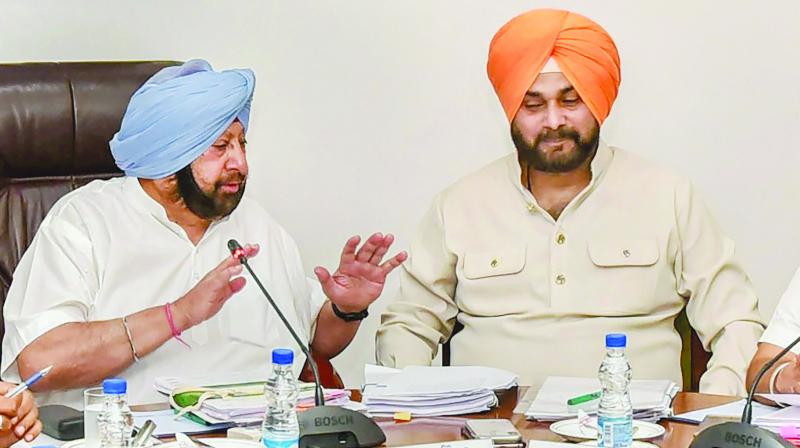 Chandigarh: Not new to controversies Punjab minister for tourism and cultural affairs Navjot Singh Sidhu has been forced to go the defensive by his own annoyed Cabinet colleagues some of whom are demanding his removal for disrespecting chief minister Captain Amarinder Singh and challenging his authority in the wake of his Kartarpur visit and statements.

Though fire fighting by the Congress has ensured temporary truce between the Chief Minister and his ambitious minister, party leaders suspect that the undercurrents of the controversy may not fade away so soon.

Mr Sidhu went to the Kartarpur ground-breaking ceremony to Pakistan even as chief minister Captain Amarinder Singh declined the invitation. A controversy erupted when on coming back from Pakistan Mr Sidhu made a statement that "Rahul Gandhi is his captain" and Punjab chief minister Amarinder Singh is an Army Captain. Punjab Cabinet ministers now want Mr Sidhu to be shown the door.

"You do not wash your dirty linen in public. He (Amarinder Singh is a father-figure, I love him, respect him, I will sort it out myself," said the cricketer-turned-politician, after the party high command reportedly conveyed to Mr Sidhu that no gesture of defiance or disrespect to Captain Amarinder Singh would be tolerated.

As BJP started questioning Rahul Gandhi over Mr Sidhu's Pakistan visit, Rahul Gandhi's message to Punjab ministers that since Mr Sidhu is a star campaigner any mud-slinging at him ahead of elections in states could not be allowed.  Even Mr Sidhu was asked to refrain from making any statement.

A timely intervention by the Congress has avoided the controversy getting uglier, but party sources fear that an ambitious leader like Mr Sidhu is not among those who can maintain a low profile for a very long period.

Earlier this week when Punjab Cabinet held a meeting there were preparations to bring a condemnation resolution against Mr Sidhu asking the Chief Minister Amarinder Singh to drop him from the Cabinet and several other ministers were to second it.

However, sources say that party high command intervened well before time and stopped the Cabinet from going ahead with the move.

It is worth mentioning that Punjab rural development minister Tript Rajinder Bajwa, an loyalist of the chief minister, had been the first one to ask Mr Sidhu to resign from the Cabinet.

"The tone and body language used by Mr Sidhu while making the captain remark against the chief minister was humiliating and disgusting. He has no moral right to continue as minister," Bajwa had said.

Next to seek Mr Sidhu's resignation was revenue minister Sukhbinder Singh Sarkaria. "I feel what Mr Sidhu said does not behove a minister. He might as well resign if he is not happy,” he said.