Many people trapped inside were rescued and rushed to RML Hospital and Hindu Rao Hospital, they said. 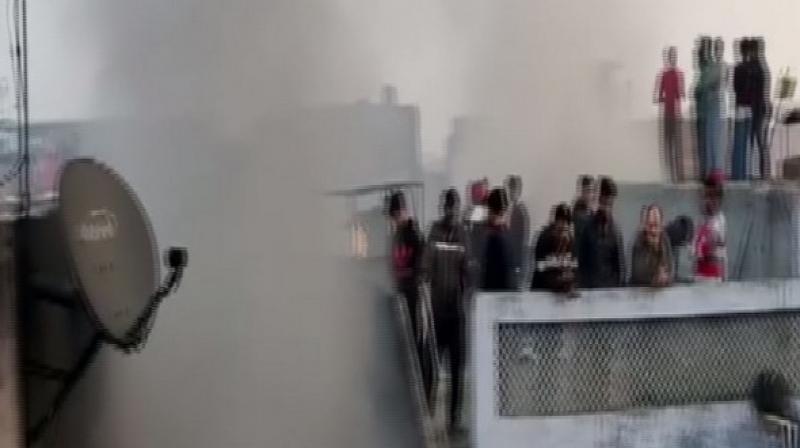 Thirty two people were killed after a fire broke out in a house in Anaj Mandi on Rani Jhansi Road here on Sunday morning, a Delhi Fire Service official said. (Photo: ANI)

New Delhi: A massive fire cause due to a short circuit in a factory claimed 43 lives in Anaj Mandi on Rani Jhansi Road here on Sunday morning, a Delhi Fire Service official said.

A call about the fire was received at 5:22 am following which 30 fire tenders were rushed to the spot.

The building, which got engulfed in a massive fire had no fire clearance from Delhi Fire Service (DFS) and no fire safety equipment were found installed in the premises.

"The building did not have fire clearance from DFS and no fire safety equipment were found installed in the premises," DFS chief Atul Garg confirmed.

Delhi Police has said the owner of the factory in Anaj Mandi, where the blaze killed 43 people, is currently absconding and an FIR has been registered against him.

"Rehan, the owner of the building against whom a case has been registered under section 304 (Punishment for culpable homicide not amounting to murder) of the Indian Penal Code, is currently absconding," Delhi Police DCP North Monika Bhardwaj told media.

The case has been transferred to the Crime Branch, Delhi Police PRO MS Randhawa said.

Around 62 people were taken out from the factory that caught fire in the wee hours on Sunday of which 43 have been declared dead.

34 have been confirmed dead in Lok Nayak Hospital, and 9 in Lady Hardinge Hospital.

The fire has been completely doused by the fire brigade team and all the persons have been evacuated from the site.

"The fire in Delhi's Anaj Mandi on Rani Jhansi Road is extremely horrific. My thoughts are with those who lost their loved ones. Wishing the injured a quick recovery," the Prime Minister said in a tweet. "Authorities are providing all possible assistance at the site of the tragedy," he said.

"V v tragic news. Rescue operations going on. Firemen doing their best. Injured are being taken to hospitals," the chief minister said in a tweet.

Expressing grief over the death of 32 people in a major fire that broke out in Anaj Mandi at Rani Jhansi Road here, Union Home Minister Amit Shah on Sunday instructed concerned authorities to provide all possible assistance on urgent basis.

The Home Minister also prayed for the early recovery of the injured.

He said that he has "instructed concerned authorities to provide all possible assistance on an urgent basis."

Dr Kishore Kumar, Medical Superintendent of Lok Nayak Hospital, told ANI: "We got 14 casualties, of which 10 were brought dead. The causalities have been brought from basti area near filmistan. Our team of doctors is attending to those who are alive."

Giving details of the incident, Deputy Fire Chief Officer Sunil Choudhary said: "A fire broke out in a 600 sq feet plot. It was very dark inside. It is a factory where school bags, bottles and other materials were kept."

The officer further said the fire was of "medium category" and had been completely doused.