The seven-member team was led by senior superintendent of police Manzil Saini and included a forensic expert. 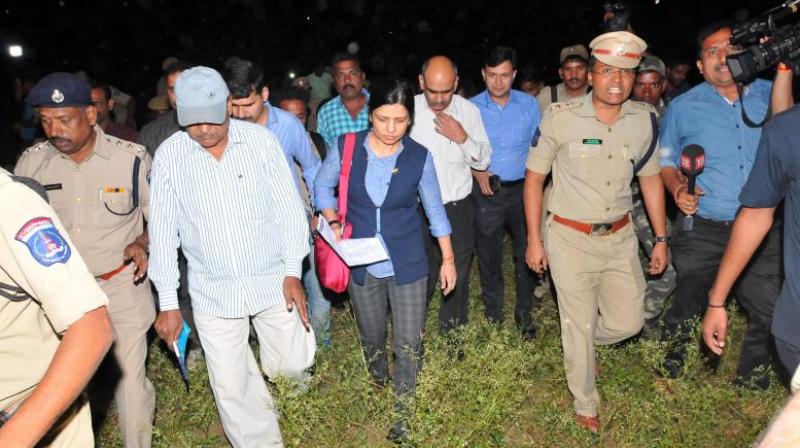 A team of National Human Rights Commission from Delhi inspect the spot where the four accused of rape and murder of Disha were gunned down in an exchange of fire on the outskirts of Chattanpally on Saturday. (Photo: P. Surendra)

Hyderabad: An investigative committee of the National Human Rights Commission arrived in Hyderabad on Saturday and began its inquiry into the killing of the four accused of the rape-murder of Disha on the outskirts of Chattanpally village in Telangana.

The seven-member team was led by senior superintendent of police Manzil Saini and included a forensic expert.

After the death of Mohammed alias Areef, J Shiva, J Naveen, and C Chennakeshavulu, in an alleged exchange of fire with the Cyberabad police party on Friday, their bodies were shifted to the Mahabubnagar government hospital mortuary and a postmortem was conducted by forensic doctors from Gandhi Hospital.

The NHRC took suo moto cognizance of the incident and issued notices to the Telangana police. It decided to visit the mortuary and inspect the crime scenes where Disha was killed, set ablaze and the alleged encounter took place.

The committee first visited the Mahabubnagar government hospital mortuary. Over four hoursthe team examined the bodies and studied the bullet injuries. The team interacted with doctors and also scrutinized the autopsy report.

Later, Shamshabad DCP N Prakash Reddy accompanied the team to the outskirts of Chattanpally village in Shadnagar mandal to examine the crime scenes.

The NHRC members visited the spot where Disha was set ablaze by the accused and then the spot where Mohammed, Shiva, Naveen, and Chennkeshavulu were gunned down.

The committee walked from one crime scene to the other and collected the details. They also questioned police officials on the sequence of incidents that led to the exchange of fire on Friday morning.

On the team’s instructions, DCP Reddy told the media: “The investigative committee has visited the mortuary at Mahabubnagar and examined the bodies and then inspected the scenes of crime. It would give a report to the NHRC at Delhi.”

The committee also visited the crime scene at Thondupally where Disha was raped and murdered by the four accused on November 27 and inquired about details.

Later in the night, the committee was expected to visit Care Hospital, where two policemen, sub-inspector K Venkateshwarlu and constable Aravind Goud of Nandigama police station, are being treated after they reportedly suffered injuries in the encounter.